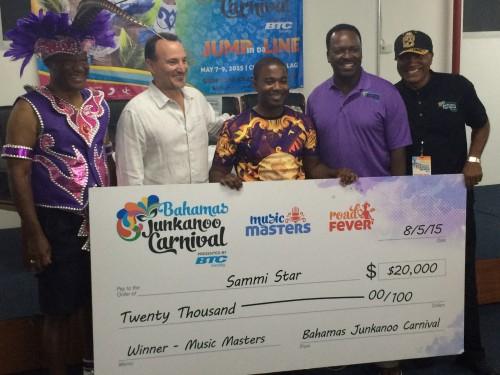 Conquering over 180 competition entrants, including the other extremely talented 18 semi-finalists, Sammi ‘Starr’ Poitier secured a deal with one of the largest music and entertainment corporations in the world. “The process has been a long one,” said Sammi Starr. “I felt that it was a great opportunity for all of us and I am extremely proud of the outcome, not just because of the Music Masters competition itself but for the entire Junkanoo Carnival event. “It’s historical and the success of this was just mind blowing and I’m proud to be Bahamian, proud to be a part of it and proud to have won $20,000.”

Over the past year, competing songs were whittled down from 180 to the top ten. During a live performance on the mega stage at the country’s first Bahamas Junkanoo Carnival, sponsored by BTC, Bahamian artists performed in front of a packed venue, which included a judging panel of music experts. Ruben Leyva, Senior Vice President of Business Development, Latin Iberia, at SONY also flew in to sit on the judging panel.   “SONY is extremely excited about the collaboration with the Bahamas National Festival Commission (BNFC), as we are making history in the Bahamas. We jumped at the opportunity to participate in the first ever Bahamas Junkanoo Carnival offering a promotional partnership to the winner of the Music Masters concert,” said Mr Leyva. “I was impressed by the amount of talent showcased in the Music Masters competition. The performances were indicative of the characteristics we believe every artist should have: raw talent, showmanship, stage presence and a uniqueness that captivates an audience.” The SONY promotional partnership was a result of an agreement between The Bahamas National Festival Commission (BNFC) and the music entertainment giant and is a first of its kind for the Bahamas. It will give the Music Masters winner an opportunity to have his hit song, “Jump in Da Line” recorded and produced by a renowned producer. SONY will design the cover artwork for the single, coordinate a digital promotional day with key digital media partners, and design and execute a comprehensive social media branding strategy for one year which includes creating a VEVO/YouTube artist channel for online promotion. BNFC Commissioner Fred Munnings Jr. said the Bahamas has yet to see the magnitude of the impact the Music Masters Song Competition will have on the development of Bahamian artistry. “The music sector in The Bahamas has craved for such an event that could stimulate musical production and showcase our raw Bahamian talent to the world. The Music Masters competition will grow from year to year, and bring great exposure for our artists on the world stage,” said Munnings. Song competition artists performed alongside the Grammy Award winning Baha Men, and the King of Soca music, Machel Montano. “With this SONY partnership, we can only anticipate more great things to come,” he said. “I entered the Music Masters song competition with the expectations of wanting to be a part of the rebirth of Bahamian music. Bahamas Junkanoo Carnival has given every Bahamian artist a new platform to showcase their musical talent to the world and I am honoured to have been chosen the winner. This is an opportunity I could not have imagined but I am ready to carry on the legacy of Bahamian musical as a cultural Ambassador to the world,” said Sammie Star.