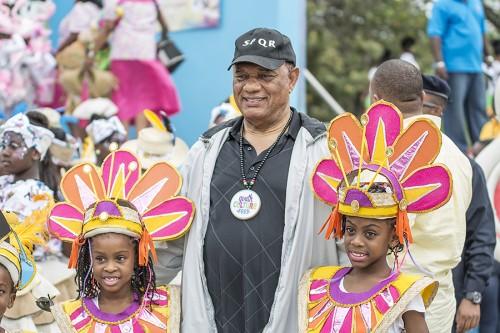 The first Youth Culture Fest, hosted by the Bahamas National Festival Commission, concluded on Saturday to the cheers of hundreds of youngsters excited to be involved in the first-of-its-kind cultural parade.

Although inclement weather rescheduled the parade from its’ original Friday time, attendance at Saturday’s Fest was significant, with many attendees on the roadside to support the participants of the inaugural parade. Prime Minister Perry Christie congratulated the organizers of the parade – Dr. Ann Higgins and Pastor Henry Higgins – for successfully carrying out the vision of immersing the nation’s youth in an all around cultural parade. In total, twenty-four schools and youth organizations lined the streets at the Western Esplanade near Arawak Cay playing instruments, singing and dancing as they showcased costumes that represented islands of The Bahamas in theme and design.

“I am so pleased with the effort that the different youth organizations put into their presentations for the Youth Culture Fest,” said Dr. Ann Higgins, organizer of the YC Fest. “They were so happy to have a platform like this where they could display their talents and creativity in incorporating the indigenous material.” “All day they were smiling from ear to ear to see the support they got from the public who came out to watch them.” Dr. Higgins said she was already looking at ways to advance the parade for 2016, which could include participation from more youth organizations locally and internationally. The participants paraded along a designated route starting at the top of Fort Charlotte down to West Bay Street, heading west to the eastern entrance for Arawak Cay, and west to the Fish Fry.

A mini-cultural show followed the parade, where there were lots of music, arts, food and dancing. The event received full participation from 24 organizations, including pre-schools, senior high schools and community groups around town. The Bahamas National Festival Commission believes the possibilities of expansion with the Youth Culture Fest are endless. “We have planted a seed,” said CEO of the BNFC Roscoe Dames, “and now we will let it grow.”