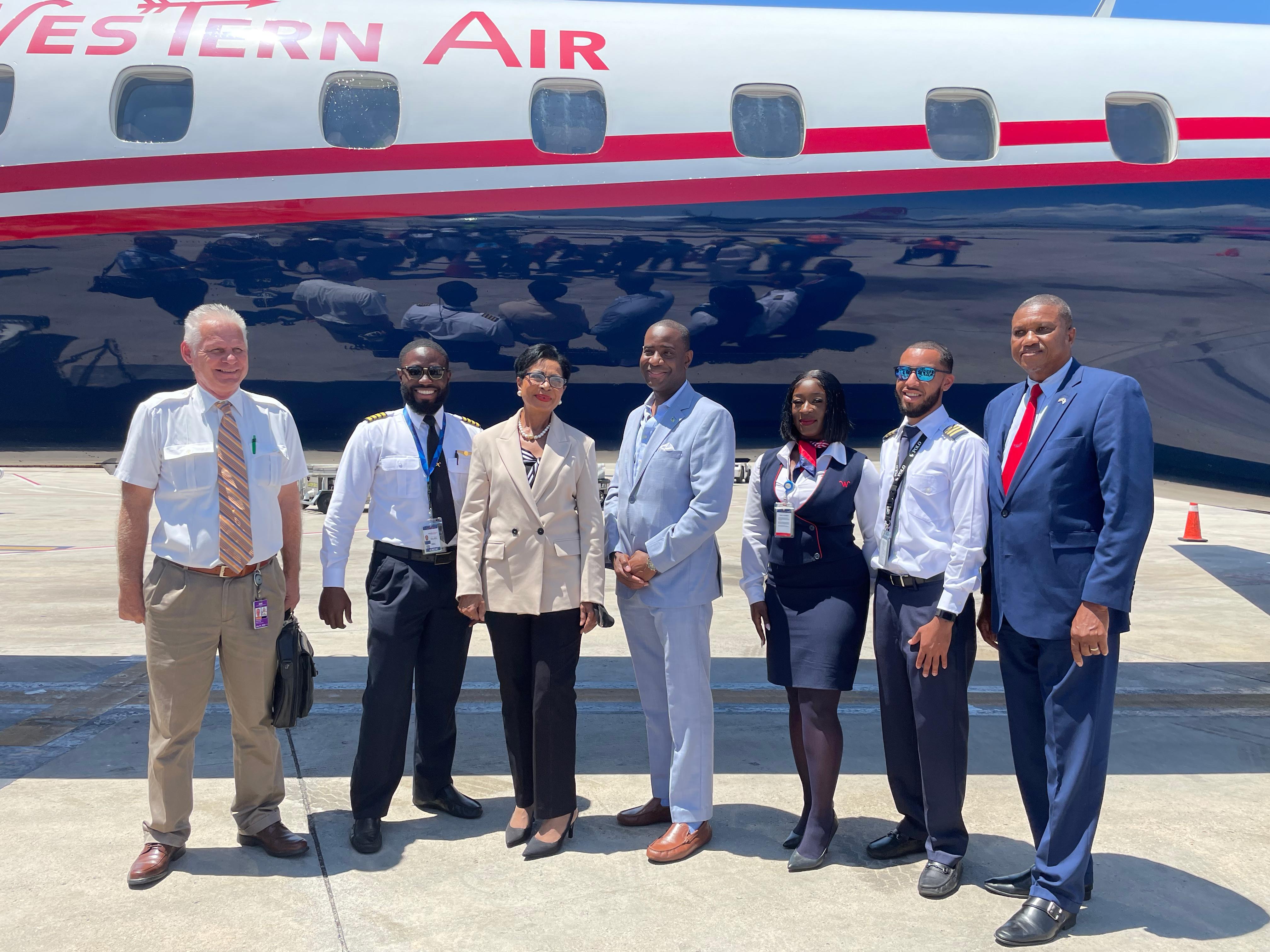 NASSAU, Bahamas (20 May 2022) – Bahamian owned and operated commercial airline, Western Air, took a long runway into the international friendly skies yesterday when it made its first flight between Nassau and Fort Lauderdale, Florida as another airline alternative for travellers. The 50-seater Embraer ERJ145 Jet took off from Lynden Pindling International Airport at 11 a.m. en route to Fort Lauderdale Hollywood International Airport, a first in the airline’s almost 21-year existence.

Dr. Kenneth Romer, Deputy Director General and Acting Director of Aviation, Bahamas Ministry of Tourism, Investments & Aviation (BMOTIA), lead officials and media welcoming the first passengers during the inaugural ceremony at Terminal 1, Concourse C. A special guest who also travelled on the inaugural flight was Anne-Marie Davis, wife of Prime Minister of The Bahamas the Honorable Philip Davis. The ceremony kicked off with the disembarkation of passengers on the inaugural flight, who were greeted in the terminal by the rhythmic sounds of Junkanoo, a Bahamian cultural celebration, complete with cowbells, pulsating beats of goatskin drums, and whistles.

Western Air will operate daily jet service on its new international route into Fort Lauderdale providing an incentive of no change or cancellation fees, with all tickets being valid up to six months. In the coming weeks, the air carrier is expected to expand service from Freeport on Grand Bahama Island into Fort Lauderdale as well.

Headquartered at the San Andros International Airport on the island of Andros, Western Air was founded in 2001 by Captain and Flight Instructor Rex Rolle and his wife, Shandice Rolle. Their daughter Sherrexcia “Rexxy” Rolle is the Vice President of Operations.

The Bahamas has over 700 islands and cays, as well as 16 unique island destinations. Only 50 miles off the coast of Florida, it offers a quick and easy way for travellers to escape their everyday. The island nation also boasts world-class fishing, diving, boating, and thousands of miles of some of the Earth’s most spectacular beaches for families, couples, and adventurers to explore. See why It’s Better in The Bahamas at www.bahamas.com or on Facebook, YouTube or Instagram.