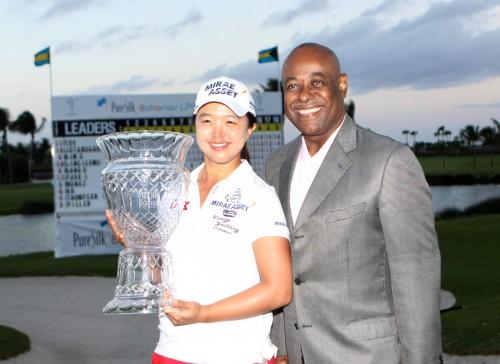 PARADISE ISLAND, The Bahamas – Rookie Sei Young Kim, 22, of Korea emerged the winner of the successful Pure Silk-Bahamas LPGA Classic, earning her the trophy and a $195,000 cheque.

Minister of Tourism the Hon. Obie Wilchcombe in applauding the winner and participants pledged to continue the relationship with the Ladies Professional Golf Association in hosting the annual Pure Silk-Bahamas LPGA Classic over the next three years.

He made the announcement during the closing ceremony of the tournament held at the Ocean Club Golf Course, following which

Mr. Wilchcombe congratulated partners and sponsors for hosting a successful tournament held February 2 – 8; the rounds were played Thursday through Sunday.

“This has done so much for our country. We want to thank Pure Silk and Atlantis for causing this to be successful. We are going to continue our relationship [in hosting] this tournament,” Mr. Wilchcombe said.

An exciting and pulsating performance by the Oakes Field Primary School Junior Junkanoo Group capped off the closing ceremony.

Winner, Sei Young Kim said she was not that nervous heading into the playoffs. She had no idea she was going to win in her rookie year.

“Just before the last putt, I was super nervous. But I’m fine,” she said.

Kim said she had no problems playing in the windy conditions over the past several days on the golf course, because she’s had a lot of experience playing in such conditions in Korea.

“I joined the LPGA in hopes of making the Korean Olympics team and this is one step towards that, so this means a lot to me,” said Kim.

It was her first career LPGA victory and she became the first Rolex First-Time Winner of the 2015 season. It was also Kim’s first appearance at the Pure Silk-Bahamas LPGA Classic. She won in a three-person playoff, beating Ariya Jutanugarn and Sun Young Yoo.

The third annual Pure Silk-Bahamas LPGA Classic is the second of 33 events on the LPGA schedule. It offers a $1.3 million purse with $195,000 going to the winner. Last year, Jessica Korda won her second career LPGA title with a one-stroke victory over Stacy Lewis.

The 120-player field featured six of the top 10 players in the Rolex Women’s World Golf Ranking. The Bahamas’ Raquel Riley participated in the tournament before pulling out on Friday due to an ailment. The tournament was featured in 10 hours of live coverage on the Golf Channel.