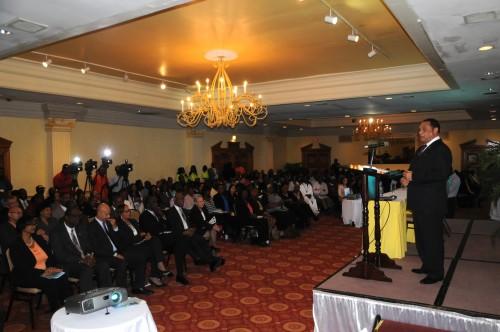 Prime Minister Perry Christie regarded Bahamians as the asset the tourism industry depends upon in order to sustain the tourism product.

He was addressing a Tourism Symposium held for frontline tourism professionals at SuperClubs Breezes Resort on Wednesday, January 21, 2015.

The Ministry of Tourism is celebrating its Golden Jubilee – the symposium being amongst activities taking place for Tourism Awareness week, which ends with the Cacique Awards honouring the finest in the industry on Saturday, January 24, 2015.

“We in the government have to maximize use of our assets. This industry is about you. It is those in the industry who will guarantee success of the industry by being involved,” the Prime Minister told the crowded room of tourism stakeholders.

He said in looking at the country, there is that “indomitable spirit” and the philosophy of “Yes We Can” when it comes to Bahamians achieving much success whether in the international arena or locally: Bahamians are stakeholders and the value of their participation is more meaningful than that of hotel owners, as the hotel owners can pull up and leave but Bahamians are here to stay.

The Prime Minister said that Bahamians must be mindful of what is going on around them – as Cuba is about to open, should the United States end the decades old embargo, and that China is a very competitive market with more than one hundred million tourists traveling per year.

“We are all in this together. There must be an understanding that we are here for a season. You have to commit yourself to excellence in service,” the Prime Minister said.

In this regard, he noted that the tourism product must be examined and enhanced in order for visitors to get value for what they pay for. Such areas would be cultural and heritage sites like the Water Tower, the Forts, Clifton Heritage Park and other historical landmarks, which could also be used to educate children and tourists alike.

The prime minister also mentioned that the incidents of crime must be minimized in the interest of keeping the tourism product competitive.

Minister of Tourism  Obie Wilchcombe who also addressed the symposium underscored the importance of safeguarding the tourism product.

He said the words, “I love my country,” should guide Bahamians, especially those who are the stakeholders in the Tourism Industry.

“Our great country depends on the work, commitment and how much we love and appreciate each other.”

According to the Minister, the country has come along way in its 41 years of Independence, as there are any accomplished Bahamians who have broken barriers internationally such as actors Bert Williams and Sir Sidney Poitier and in sports, NBA great Mychal Thompson and baseball’s Andre Rodgers.

“Our Bahamian people have a tremendous amount of talent  and  we ask for your re-dedication and commitment to show that we are the best in The Bahamas,” Mr. Wilchcombe said.

Also addressing the  opening ceremony was Joy Jibrilu, Director General of Tourism.   Presenters over the two-day period covered topics such as: The Critical Role of Tourism in the Bahamian Economy, Remaining Competitive in a Global Environment, The Success of Tourism Depends on You, and Developing A Strategy for Service Quality Excellence.