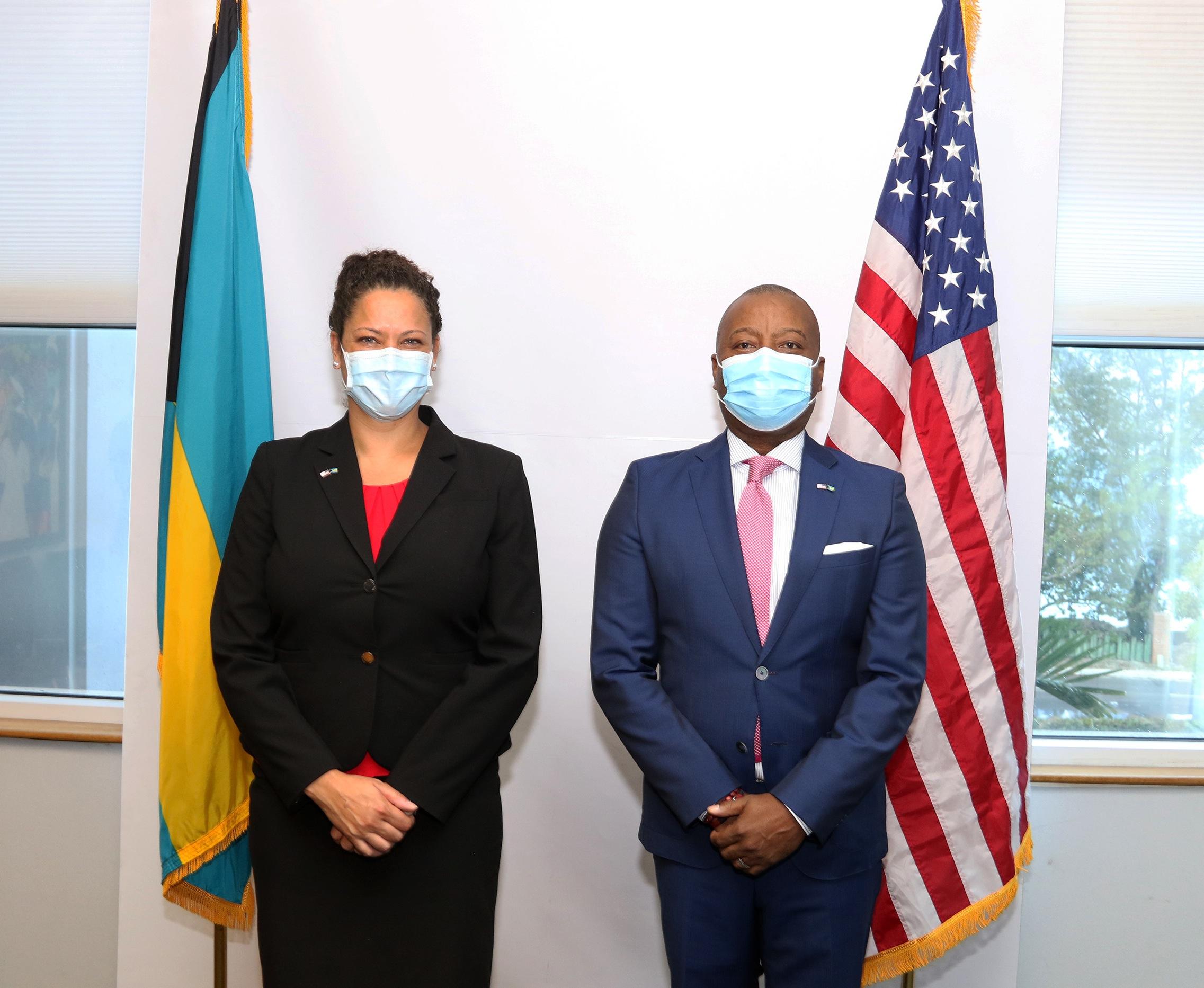 Photo Caption: The United States has appointed Usha E. Pitts, as the new Chargé d’Affaires, a.i. to The Bahamas.  On Monday, 1st February 2021 she paid a courtesy call on the Minister of Foreign Affairs, the Hon. Darren Henfield at the Ministry’s offices.   (BIS Photo/Patrick Hanna)

NASSAU, The Bahamas -- The United States has appointed Usha E. Pitts, as the new Chargé d’Affaires, a.i. to The Bahamas.  On Monday, 1st February, she paid a courtesy call on the Minister of Foreign Affairs, the Hon. Darren Henfield at the Ministry’s offices. Also in attendance were Permanent Secretary of the Ministry of Foreign Affairs Peter Deveaux-Isaacs and Director General, Sharon Brennen-Haylock.  Chargé d’Affaires Pitts was accompanied by Mr. Garrett Wilkerson, Acting Deputy Chief of Mission and Director/International Narcotics and Law Enforcement Affairs; and Mr. Daniel Villanueva, Political- Economic-Commercial Chief.

Chargé d’Affaires Usha Pitts began her tour at the U.S. Embassy in The Bahamas on New Year’s Day 2021.  Prior to this post, she served at diplomatic posts in Russia, Cuba, Italy, Austria, Panama and Brazil. She has also served in Washington, D.C. and New York City.  She began her career at U.S. Embassies in Moscow and Panama City.  She has worked in Havana, where she tracked the Cuban economy.

As the Diplomat in Residence for New York City, Ms. Pitts recruited aspiring diplomats and promoted public service.  During her most recent tour abroad, Ms. Pitts led the U.S. Consulate General in Recife, a seaside city in Brazil’s growing Northeast region.  Ms. Pitts also worked in Rome and Vienna as a U.S. liaison to international organizations, dealing with food security and atomic energy.

During her tour in Washington, Ms. Pitts supervised a team in the State Department’s Operations Centre, a 24-hour crisis management and communications center.

Ms. Pitts was born and raised in Massachusetts, the daughter of an interracial marriage.  At the age of 11, she traveled to India, an experience that led to a lifetime of travel and an eventual career in the Foreign Service. She speaks Mandarin, Russian, German, Spanish and Portuguese.  She holds degrees from the University of Massachusetts, George Washington University and the Naval War College.  She and her husband are the proud parents of two teenagers.  They look forward to learning about The Bahamas and other island nations in the English-speaking Caribbean.