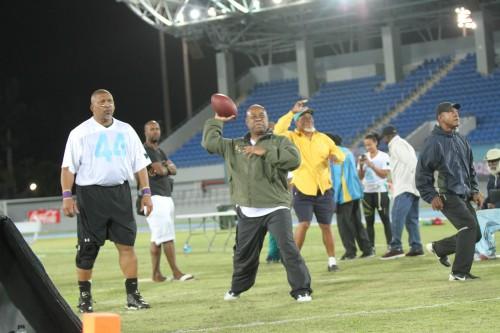 Minister of Tourism Obie Wilchcombe was among a number of Bahamian football players, who got the once-in-a-lifetime opportunity to play a historical flag football game against 18 Miami Dolphin Legends on Saturday, February 21 at the Thomas A. Robinson Stadium in New Providence.

The event closed out the second annual Dan Marino and Friends Weekend, which was held February 19-21.

However, in the end, the Hall of Famers easily crushed the Bahamas All-Stars with a score of 54-33.

Minister Wilchcombe, who played football in his college years, said the game was “historic”.

“You have the Mark brothers here-Mark Clayton and Mark Duper, Nat Moore and Dan Marino – one of the greatest quarterbacks of all time. You are not going to see that team on the field too often,” he said.

“This is historical. We should feel great about it. They came and they wanted to play and they are giving up their time to play. I just think it is tremendous and a great historical moment.”

Mr. Marino, who was the quarterback for the legends during the game, spoke about experience.

Mr. Drayton, who is a former Miami Dolphins tight end position player, said it felt like he was in the locker room with his teammates again.

“Just playing with them again and getting to play with some of the Bahamian players was a great experience. We didn’t realize how much love we have over here and there are a lot of Dolphins fans and that is one thing that we appreciate. We are here. We are a part of the Bahamian community. If they don’t invite me back I’m coming anyway,” he said.

Mr. Wooden, who played the safety position, spoke about how much he enjoyed the experience.

“We always love it when we come to The Bahamas. We had so much fun out there on the field just cheering on the guys and the Bahamian team. Only for the people of The Bahamas do I get back out on the football field. This is an once-in-a-lifetime thing but I definitely had fun. I’ll be back here in a few months. It’s my home away from home,” he said.

The Miami Dolphins have a five-year contract with the Ministry of Tourism to bring the Dan Marino and Friends Weekend to The Bahamas and to provide a promotional stage for The Bahamas at the Sun Life Stadium in Miami, Florida.

Other events of the Dan Marino and Friends Weekend included a welcome reception at Atlantis Paradise Island, golf at the Ocean Club Golf Course, a sunset cruise and a youth clinic at the Thomas A. Robinson National Stadium.