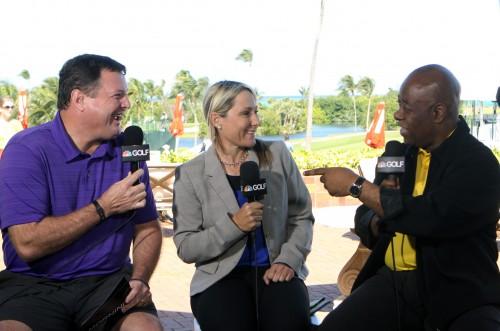 PARADISE ISLAND, The Bahamas – The catchy slogan “It’s Better in The Bahamas” rolled off the lips of the Minister of Tourism the Hon. Obie Wilchcombe during a live interview on the Golf Channel at the Pure Silk-Bahamas LPGA Classic at the Ocean Club Golf Course on Sunday, February 8, 2015.

He declared Golf Channel on-air talents and commentators Charlie Rymer and Karen Stupples “ambassadors” of The Bahamas during the segment, which was about six minutes and millions of dollars in free advertising for the country.

When asked about the country’s hosting the third annual Pure Silk-Bahamas LPGA Classic, Mr. Wilchcombe quipped, “It’s Better in The Bahamas!” to which Rymer chuckled, “I knew you were going to say that!”

The Minister explained that The Bahamas has so much else to offer besides the traditional sun, sand and sea.  “The Bahamas is a place where dreams are made, where you can do the things that you always wanted to do. So you can come to The Bahamas and take care of that and have a good time.”

The Bahamas is made up of more than 700 islands and cays.  The Minister was asked how easy is it to get to the Family Islands and what sort of activities are there to do.  He replied: “We have 16 inhabited islands that we are really focusing on right now. Some of the principal islands are New Providence, Grand Bahama, Abaco, Eleuthera, Bimini and some of the Southern Islands we want people to discover.”

Mr. Wilchcombe said that the city of Nassau, the capital of New Providence, serves as the hub and visitors could catch scheduled flights or ferry boat services from the United States to the islands.  “It’s not too far away, particularly if you are in the United States -- New York or Atlanta, it takes you about two hours and Miami, Florida, it takes about 30 minutes to get here.

“But when you get to The Bahamas – you will see one thing that’s consistent – the hospitality of the Bahamian people. That’s our greatest asset but every island is different,” he said.

He noted there are six golf courses throughout the islands and in Bimini visitors can interact with history where Ernest Hemmingway, Adam Clayton Powell and Martin Luther King Jr. frequented for inspiration and fishing.

“That is why we are so proud of the fact that God has given us a tremendous location. We are right next door to the United States, and 90 percent of our visitors come from the United States.  We say proudly that it is Better in The Bahamas.

To this Rymer responded, “Well Obie, you have two believers here and we’ve had a wonderful time. Thank you again for hosting us.”

Mr. Wilchcombe said, ”You have been wonderful ambassadors. Thank you for coming.”

The Minister’s interview came on the heels of Director General Joy Jibrilu’s interview with the Golf Channel on Wednesday, February 4.