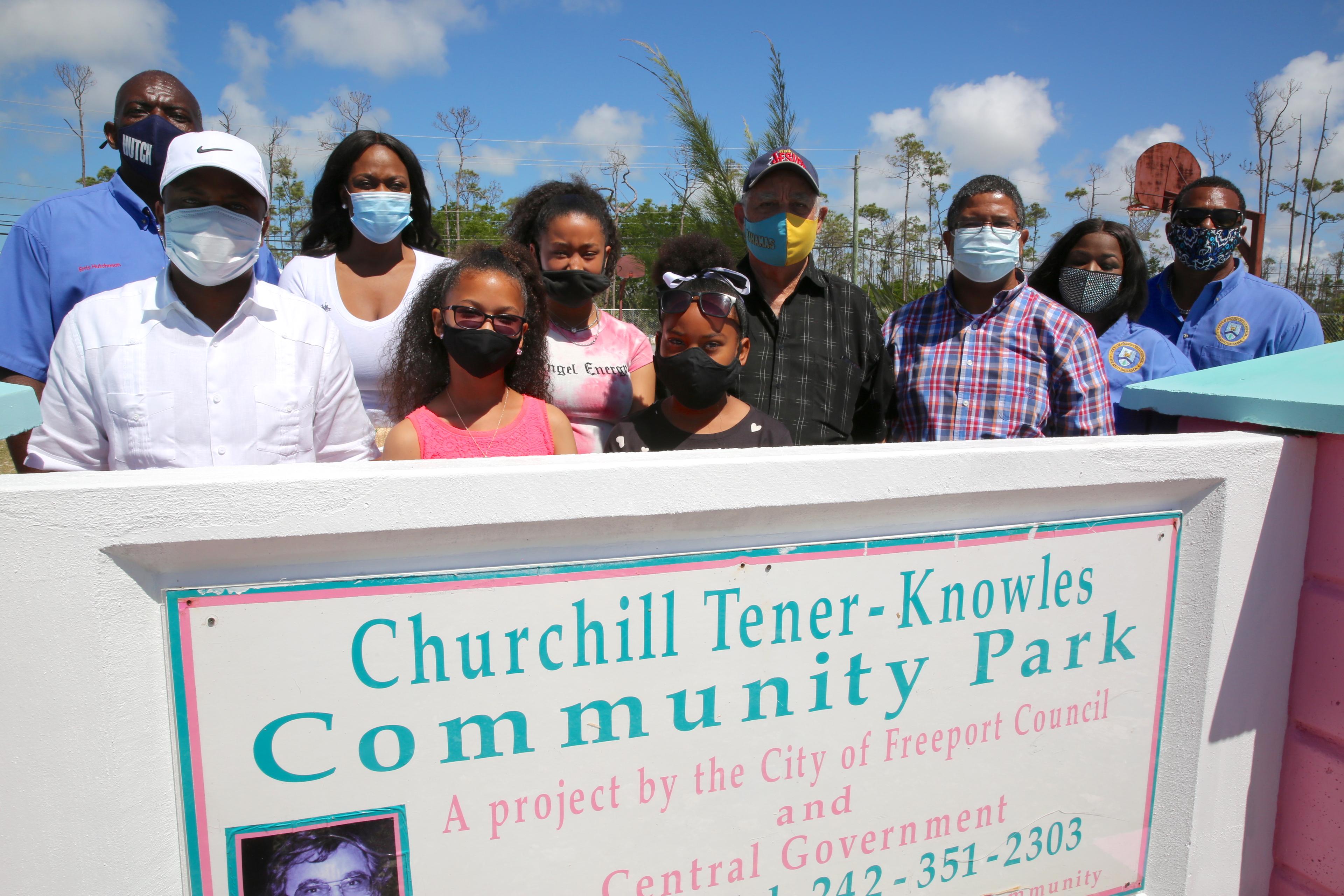 NEW COMMUNITY PARK – Minister of State for Finance and for Grand Bahama the Hon. Kwasi Thompson (left) and Member of Parliament for East Grand Bahama, K. Peter Turnquest (third from right) were on hand for the official naming of the Churchill Tener-Knowles Community Park on Saturday, March 27, 2021. Honouree, Churchill Tener-Knowles (fourth from right), stands with some of his grandchildren and members of the City of Freeport Council.

FREEPORT, Grand Bahama—“When it comes to honouring people like Churchill Tener-Knowles, it’s never political, it’s personal,” said Minister of State for Finance and for Grand Bahama, the Hon. Kwasi Thompson. “It’s personal because we know of the life that he has lived. And we know of the service he has given.”

Minister Thompson’s remarks came during the official naming ceremony of the Churchill Tener-Knowles Community Park, on Saturday, March 27, 2021. Acknowledging the achievements of Tener-Knowles in the world of sports and civics, Minister Thompson noted that Churchill achieved success in those areas in a way that serves as an example to all who strive to be community leaders.

MINISTER THOMPSON HONOURS – Minister of State for Finance and for Grand Bahama the Hon. Kwasi Thompson commended Hall of Famer, Churchill TenerKnowles during the official naming of the new Churchill Tener-Knowles Community Park on Saturday, March 27, 202. Minister Thompson, who was the keynote speaker at the event, said that Mr. Knowles has done much in the world of sports, civics and community service in Grand Bahama.

Noting that the park is a place for everyone, he said, “we cannot downplay the importance of these community parks, the government is focused and dedicated to ensuring that we continue to build these types of ventures, because we know what they represent; they build the lives of our young people.” Member of Parliament for East Grand Bahama, K. Peter Turnquest, who also addressed those gathered for the event, noted that the name Churchill TenerKnowles is very well known within the entire island of Grand Bahama, nationally and even on the international circuit. He said Mr. Knowles has contributed and poured his all into helping to build the community of Grand Bahama and represent The Bahamas abroad.

Mr. Turnquest said that because of Mr. Knowles’ highly regarded reputation his commitment to service and to people, there was no hesitation in supporting the move to name the new park in honour of Mr. Knowles.