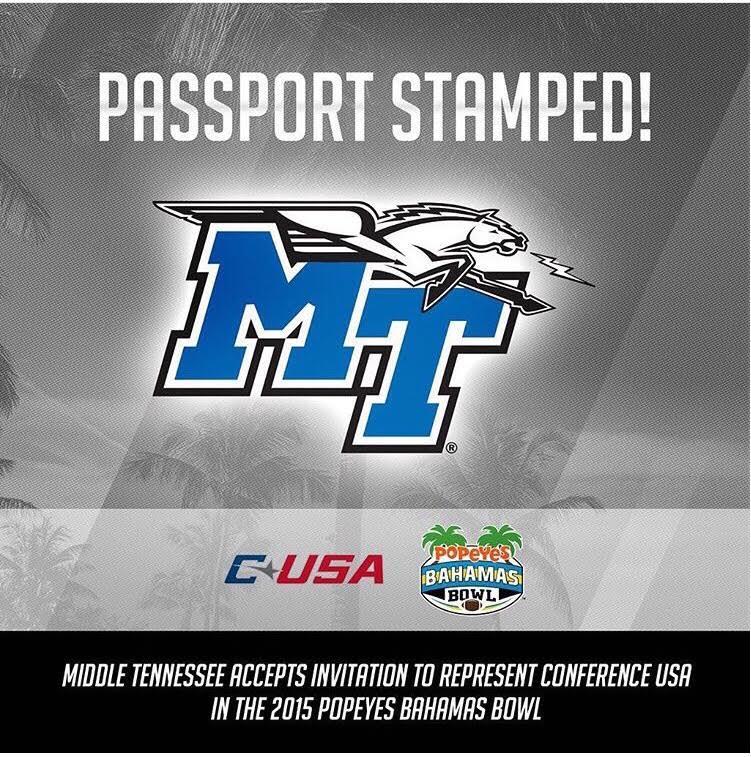 Middle Tennessee will play in a bowl game for the first time since the 2013 season as the Blue Raiders accepted an bid to represent Conference USA in the 2015 Popeyes Bahamas Bowl on Thursday, Dec. 24 in Nassau’s Thomas A. Robinson National Stadium.

The early invitation allows Middle Tennessee additional time to make preparations to play in an international destination, including obtaining passports for those who still need them in order to travel to the Bahamas as well as giving extra time for fans to make their travel plans to Nassau for bowl week.

Information on tickets and travel packages to the 2015 bowl is available through popeyesbahamasbowl.com. A reminder that all U.S. citizens who wish to attend the game must have a valid U.S. Passport to enter the Bahamas.

This will be the fifth bowl game appearance, and the first since the 2013 Armed Forces Bowl, for the Blue Raiders, all under head coach Rick Stockstill, who is in his 10th season at the school. The trip to Nassau will also be a homecoming for Middle Tennessee State University President Dr. Sidney mcphee, who is a native of the Bahamas and graduated from Nassau’s R.M. Bailey High School.

“We are pleased that Middle Tennessee will be competing in the 2015 Popeyes Bahamas Bowl,” said Pete Derzis, senior vice president, ESPN Events. “Coach Rick Stockstill and his staff have done a tremendous job in preparing the Blue Raiders all season long, and we look forward to hosting them in Nassau.”

“We are honored to be representing Conference USA in the Popeyes Bahamas Bowl,” said Stockstill. “This is a unique bowl and a tremendous location so we can’t wait to get down there and enjoy the experience.”

“This team has earned the right to be in this bowl game, and we have played a demanding schedule,” Stockstill continued. “We’re a young team so being bowl eligible for the sixth time in seven years, and this group of seniors being eligible all four years, is a compliment to this group of players and a testament to the consistency of our program.”

The Blue Raiders, 7-5 overall and 6-2 in Conference USA play, will come into the Popeyes Bahamas Bowl with a four-game win streak. The team set a school record for total offense yards with 5,504 as Middle Tennessee has over 5,000 offensive yards for the third consecutive season and the sixth time in school history. A large part of the offensive output has come from a pair of freshmen, quarterback Brent Stockstill, the son of the Middle Tennessee head coach, and wide receiver Richie James. Stockstill set a Conference USA record for most passing yards by a freshman with 3,678 yards. James, his favorite target, set a school record for receptions with 100 and became the second player in school history to have over 1,000 receiving yards with 1,220. The duo is the first 3,000-yard passing and 1,000-yard receiving combo in school history.

“This is a great bowl trip and a tremendous award for our players and coaching staff,” said Middle Tennessee Director of Athletics Chris Massaro. “I am thrilled to have our program going to the Bahamas where I know it will be a special occasion for our President, Dr. Sidney mcphee. He is from the Bahamas, and I know he is ecstatic about the chance to show off his football team in his native land. I hope a number of our fans can make the trip so we can show what the Blue Raiders are all about on a national stage.”

“This will be a fantastic experience for us because Pete Derzis and (Popeyes Bahamas Bowl Executive Director) Richard Giannini are nothing but first class and will put on an incredible show,” Massaro said.

For more information on the 2015 Popeyes Bahamas Bowl, visit popeyesbahamasbowl.com.