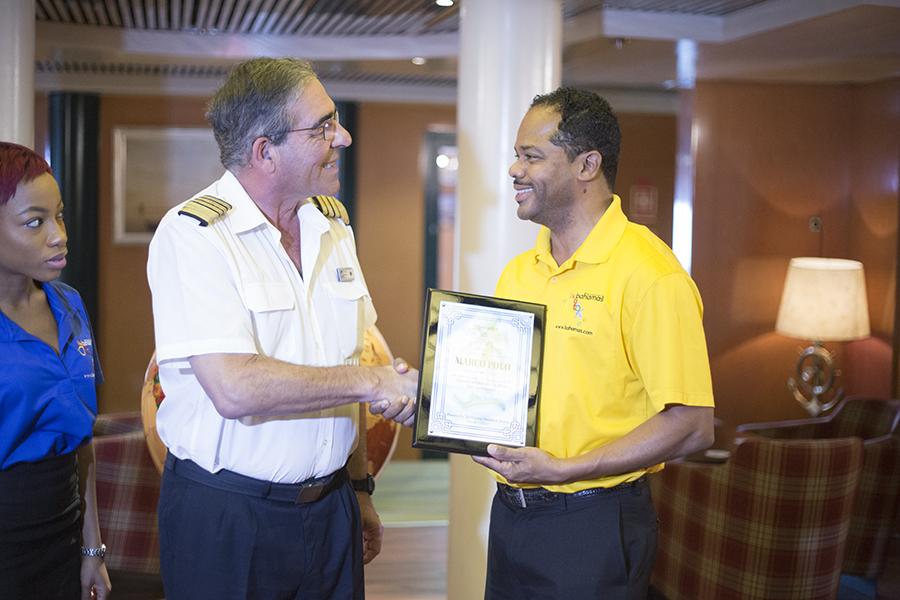 On Thursday, March 23rd, the MS Marco Polo made its inaugural voyage to Grand Bahama Island, where representatives from the Ministry of Tourism and the Freeport Harbour Company participated in a ceremonial plaque exchange with ship representatives on board the vessel.

With a total of 751 passengers on board, the vessel sails for 36 days and calls on several Caribbean cruise ports.

Antonio Morais, Captain of the Marco Polo, remarked that "It is a great pleasure after 52 years of sailing to come here for the first time to Freeport".

Nuvolari Chotoosingh, Manager, Maritime Tourism, said, "It's really wonderful to have the Marco Polo calling on Grand Bahama for the very first time; they have over 700 passengers so every little bit helps our economy globally".

Built in 1965, the Marco Polo is a classic vessel that boasts 175 meters in length and 24 meters of breadth.

The vessel, which is based in the United Kingdom, holds approximately 900 passengers at full capacity and made a previous stop in Cuba before docking at the Freeport Harbour.

Currently, there are about 250 cruise vessels which frequent the Freeport Harbour each year.

The Ministry of Tourism would like the thank the captain, crew, and the entire company, as well as the Freeport Harbour Company for doing a wonderful job in attracting more vessels and visitors to Grand Bahama Island.