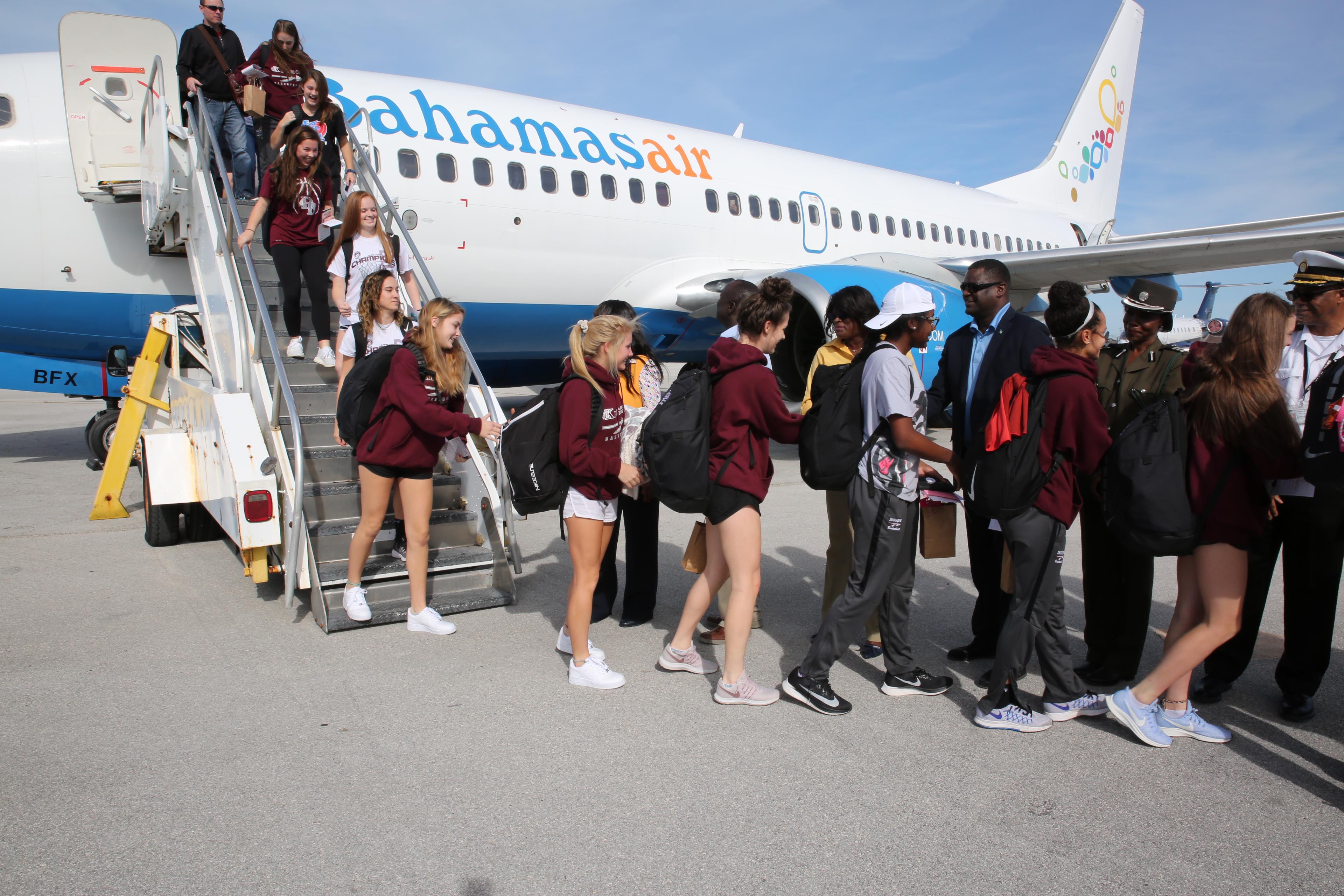 FREEPORT, Grand Bahama, November 26, 2019 — It was an exciting day for Grand Bahama on Tuesday, November 26, as the island welcomed its first official international flight to the Fixed Based Operators (FBO) at Grand Bahama International Airport since the passing of Hurricane Dorian. Representatives from The Bahamas Ministry of Tourism & Aviation (BMOTA), Grand Bahama Island Tourism Board, Grand Bahama Airport Company, Bahamas Customs and Immigration and the Royal Bahamas Police Force all assembled on the tarmac Tuesday afternoon to welcome the inbound Bahamasair Boeing 737 Jet. The capacity flight departed Tri-Cities Regional Airport in Tennessee bringing 138 passengers, all of whom are on island for the 21st Annual Tabernacle Falcons Thanksgiving Basketball Classic.

The girls’ and boys’ high school basketball teams, along with their coaches and chaperones were welcomed with much fanfare. Each guest received a personal greeting from the various industry officials upon disembarking the aircraft, and upon exiting the airport, they were treated to a Bahamas Goombay Punch soda, and the sweet sounds of Junkanoo music, provided by The Platinum Knights.

General Manager for BMOTA Grand Bahama, Steven Johnson, hailed the event as a major one for the island. “It was important for us to welcome this first commercial international flight since Hurricane Dorian. Every opportunity to put heads in beds in Grand Bahama is more important now than ever,” Johnson said. “Also, we didn’t want to disappoint the students and families, who look forward to competing in The Bahamas every year, and we felt that this year was particularly important for the local students and families.”

Every year, the teams arrive via chartered flight to the island, but this year marks the first time The Bahamas’ national flag carrier, Bahamasair, has provided this service. The flight was made possible, in large part, through the efforts of Tabernacle Baptist Christian Academy Deputy Administrator, Norris Bain, who reached out to various government officials to assist with securing travel arrangements for the visiting teams.

“As a Grand Bahamian, I feel really, really proud to have been a part of the first international flight to hit the island since Dorian. That really gave me a great sense of pride,” Bain said. He added that, as a result of the tournament, some 200 guests will be on island, making a direct and positive impact on the local economy.

“There’s so much more we can do on this island,” Bain said. “I’m not going to be one of those on the side complaining. I’m going to try to partner with the Ministry of Tourism, if they’ll let me, and try to bring more events to our island and try to see if this will be the first of many flights to come to Grand Bahama.”

During their time on Grand Bahama, the teams will stay at the Island Seas Resort and be able to enjoy a number of cultural outings and excursions.