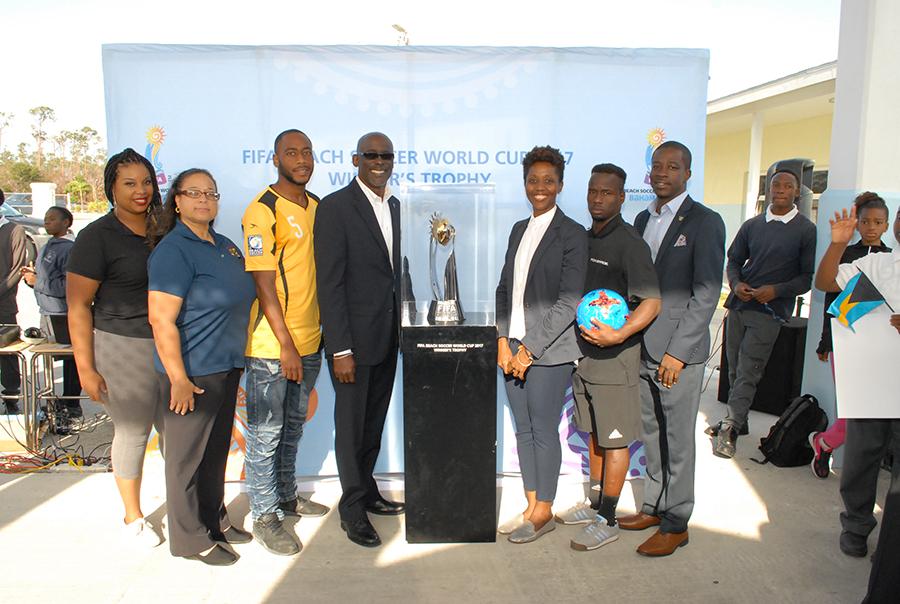 The group, whose mission was to encourage students and families to attend the official event on New Providence in April, made their first stop at the Mary Star of the Sea Catholic Academy where students got a chance to learn more about the tournament, view the trophy, hear the official song of the FIFA Beach Soccer World Cup Bahamas 2017, and meet members of the Bahamas National Beach Soccer Team.

Jeffrey Beckles, Chairman, Local Organizing Committee for the FIFA Beach Soccer World Cup Bahamas 2017 (LOC), noted that "We wanted to hit local soccer clubs here on Grand Bahama as a part of our effort and commitment to sharing in what we believe is going to be a landmark event for this country".

As this will be the first FIFA World Cup event to be held in the Caribbean Region, the event is expected to attract thousands of visitors, who will contribute to the local economy.

Jay Phillipe, Assistant Manager, Sports Tourism, Ministry of Tourism, remarked that "We are appreciative of the National Team being here on Grand Bahama to promote this event, which is one of many sporting initiatives that’s going to happen throughout the course of the year".

Currently, The Bahamas is ranked 44 out of 113 countries that compete in beach soccer, having won the first international beach soccer trophy in 2010 at the Dominican Republic's International Cup.

In February, 2017, Team Bahamas finished 5th at the CONCACAF Beach Soccer Championship played in New Providence, and the team is looking forward to open play at the FIFA Beach Soccer World Cup to be held in the capital from April 27th- May 7th, 2017.

Beckles noted that "We want Bahamians from every nook and cranny to come and support it as we play over a two week period".

The group also made stops at The Ministry for Grand Bahama,  the Sir Jack Hayward High School, and at the Grand Bahama Sports Complex, during a local track meet.

For those interested in attending FIFA Beach Soccer World Cup Bahamas in New Providence, tickets will be available free of charge for the entire competition, set for April 27 – May 7, 2017.

Beach soccer fans can also enjoy the ultimate FIFA Beach Soccer World Cup experience by purchasing one of the event’s VIP hospitality packages. Details on the exclusive packages will be made available shortly.