All Clear for The Bahamas, BMOT deactivates command center 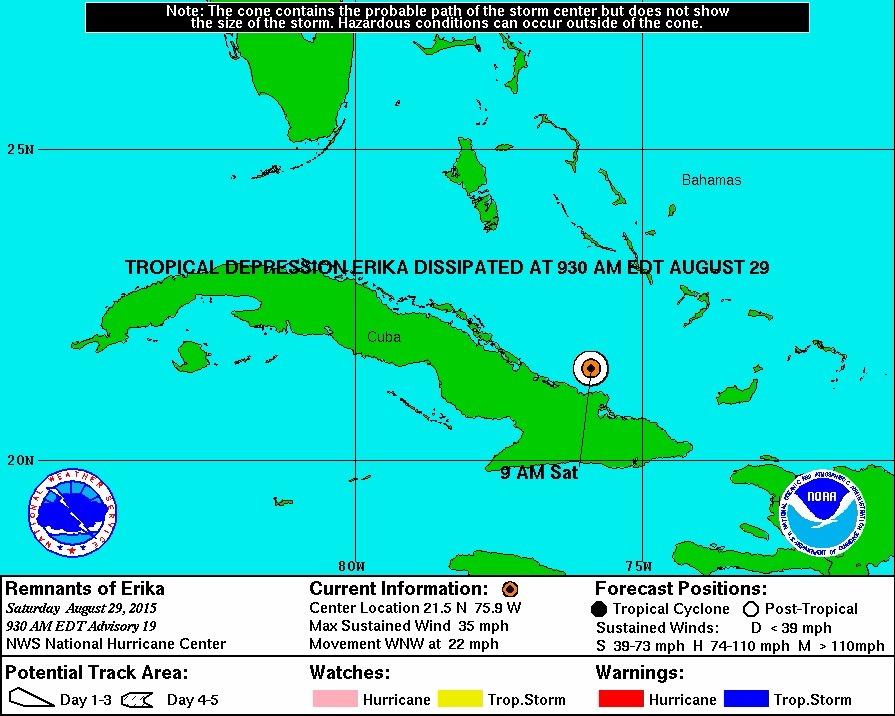 The All Clear Given as TS Erika leaves

The Bahamas Ministry of Tourism (BMOT) has deactivated its Emergency Coordinating Committee's command center after the Bahamas Department of Meteorology issued an “All Clear” for The Bahamas, as Tropical Storm Erika moved away from the archipelago on Saturday, August 29, 2015.

An All Clear means that all tropical storm watches and warnings have been discontinued for The Bahamas and the Turks and Caicos Islands.

Alert #22 was issued  by The Bahamas Department of Meteorology on Tropical Storm Erika at 10 am , Saturday, August 29, 2015, noting the storm has dissipated into a trough of low pressure.

“The all clear is now in effect. All clear means that tropical storm watches and warnings have been discontinued for The Bahamas and the Turks and Caicos Islands,” The Met Department said.

At 9:30 am the center of the remnant of Erika was located near latitude 21.5 degrees north and longitude 75.9 degrees west or about 55 miles east-northeast of Holguinm Cuba, 210 miles west of Grand Turk, 115 miles west of Great Inagua, 125 miles south of Deadman’s Cay, Long Island and 260 miles south-southeast of New Providence.

The remnant of Erika is moving toward the west-northwest near 22 miles per hour and this general motion is expected to continue for the next 24 hours or so.

Heavy showers and thundershowers are expected to produce rainfall amounts of 1 to 3 inches across the Turks and Caicos Islands as well as the Central and Southeast Bahamas through Sunday. These rains could cause moderate to severe flooding throughout these islands, particularly low-lying areas.

Small craft operators were advised to exercise extreme caution for strong gusty winds and rough seas near heavy showers and thundershowers over parts of the Southeast Bahamas and the Turks and Caicos Islands for several more hours. These gusty winds could spread to the Central Bahamas this afternoon and tonight.