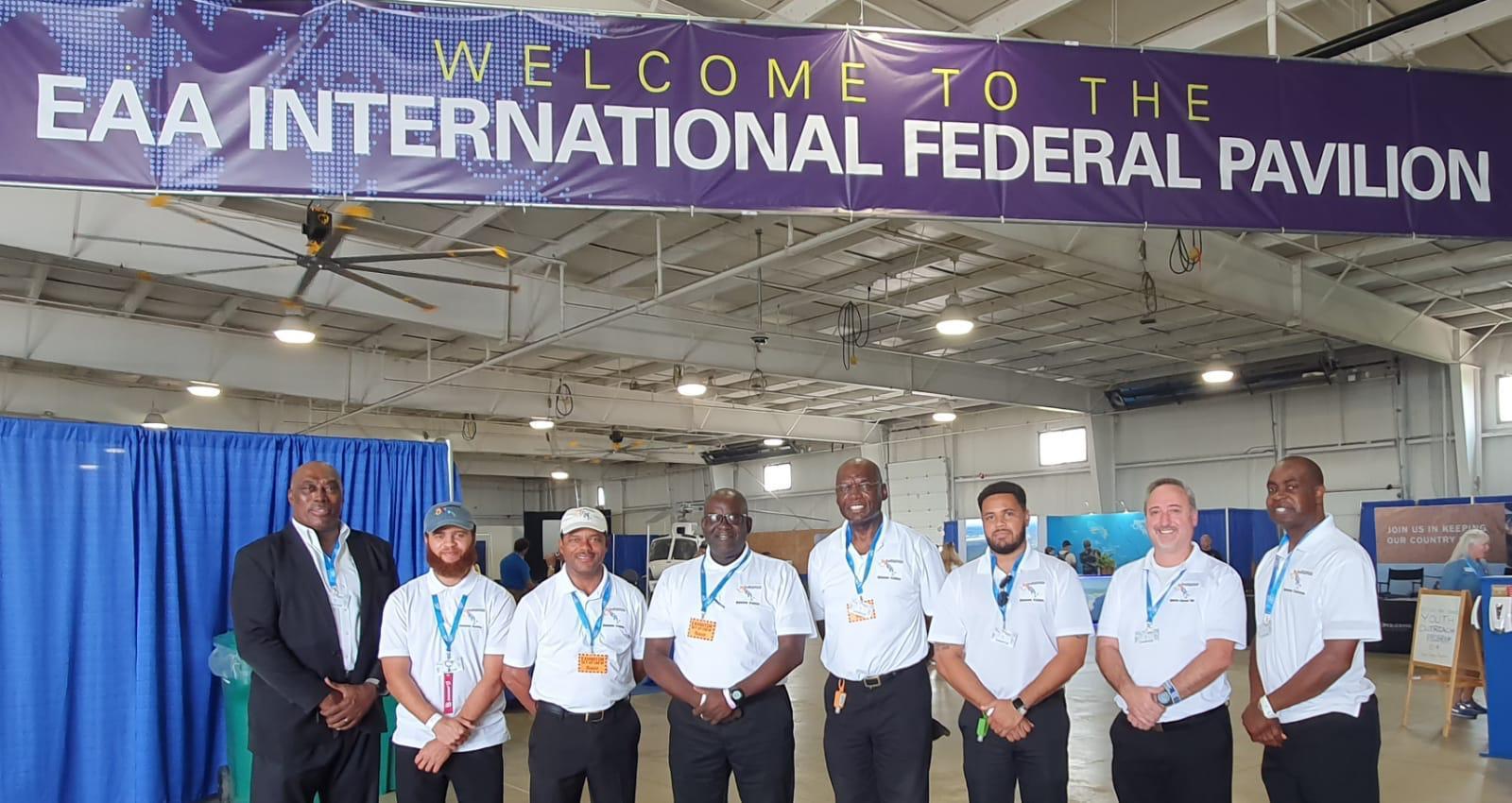 OSHKOSH, Wisconsin – August 3, 2021 –The 2021 Experimental Aircraft Association AirVenture Oshkosh, held July 26 through August 1, in Oshkosh, Wisconsin, has ended. From all accounts, aviation enthusiasts, in record-breaking numbers, agreed to the theme, “The Wait is Over.” “The Show exceeded the expectations of both the EAA organizers and the Bahamas Ministry of Tourism & Aviation’s (BMOTA) teams, despite a challenging and most unconventional year,” said Greg Rolle, Sr. Director of Vertical Markets, BMOTA. 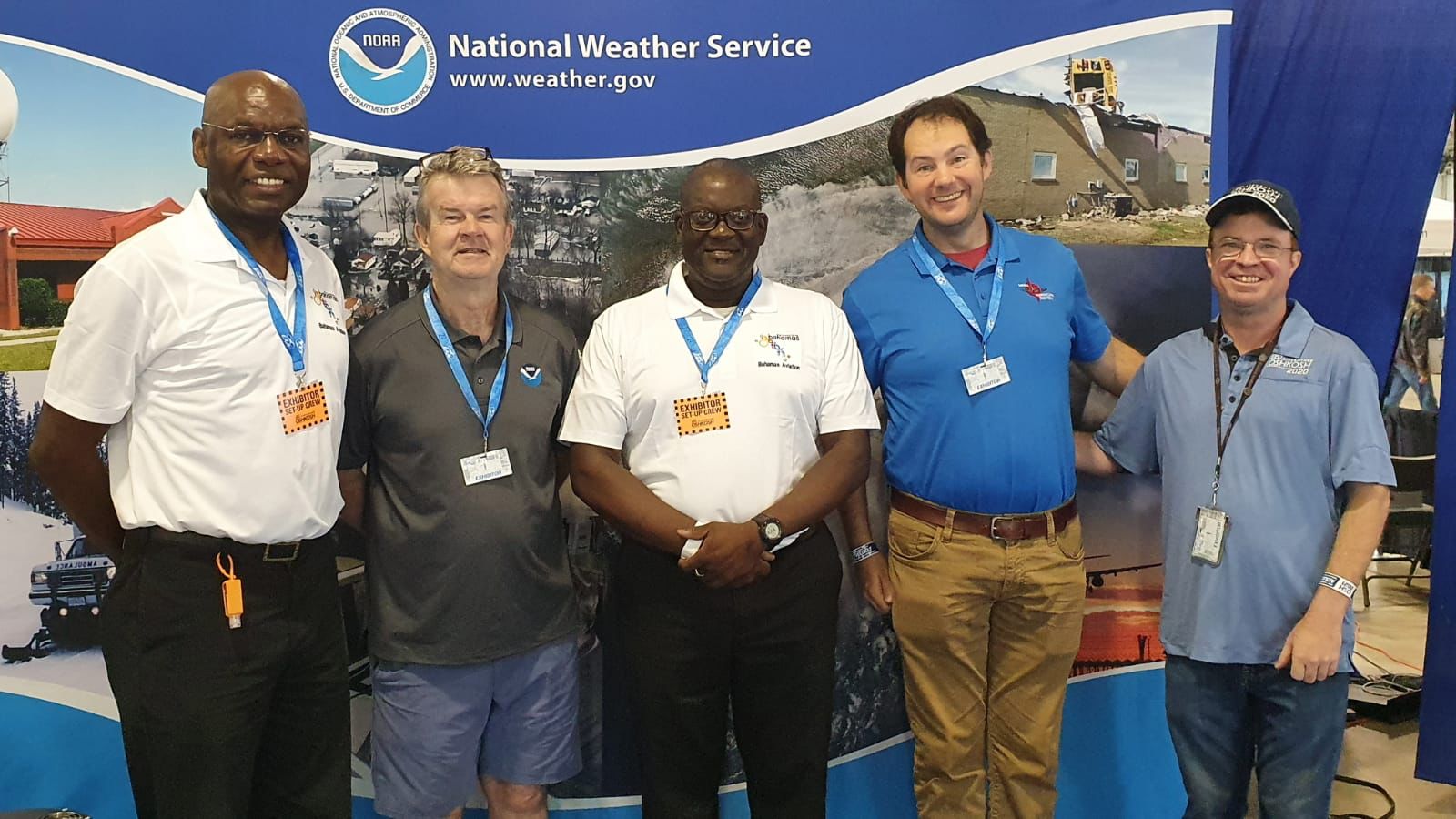 “This was perhaps the most challenging set of circumstances we’ve ever faced as an organization to make the event happen. We went into this year not knowing what AirVenture would look like and how big of an event was possible. The aviation community spoke loudly, though – it was ready to come to Oshkosh and we were happy that we could welcome them. Our theme was ‘The Wait is Over,’ and indeed it was. The wait was worth it. There was joy and excitement throughout the grounds, and it set the stage for the return of AirVenture, making us very excited about the future,” said EAA CEO and Chairman, Jack Pelton.

Based on statistics given by Pelton, some 608,000 persons, from 66 countries attended this year’s show, the third highest number in the show’s 68th year history. A total of 16,378 aircraft, including 3,176 show planes (a record 1,420 vintage aircraft registered, 1,089 homebuilt, 354 warbirds, 148 aerobatic aircraft, 112 seaplanes, 33 ultralights and 27 rotorcraft) participated. A total of 567 media professionals attended the event and more than 18.95 million social media impressions were generated. 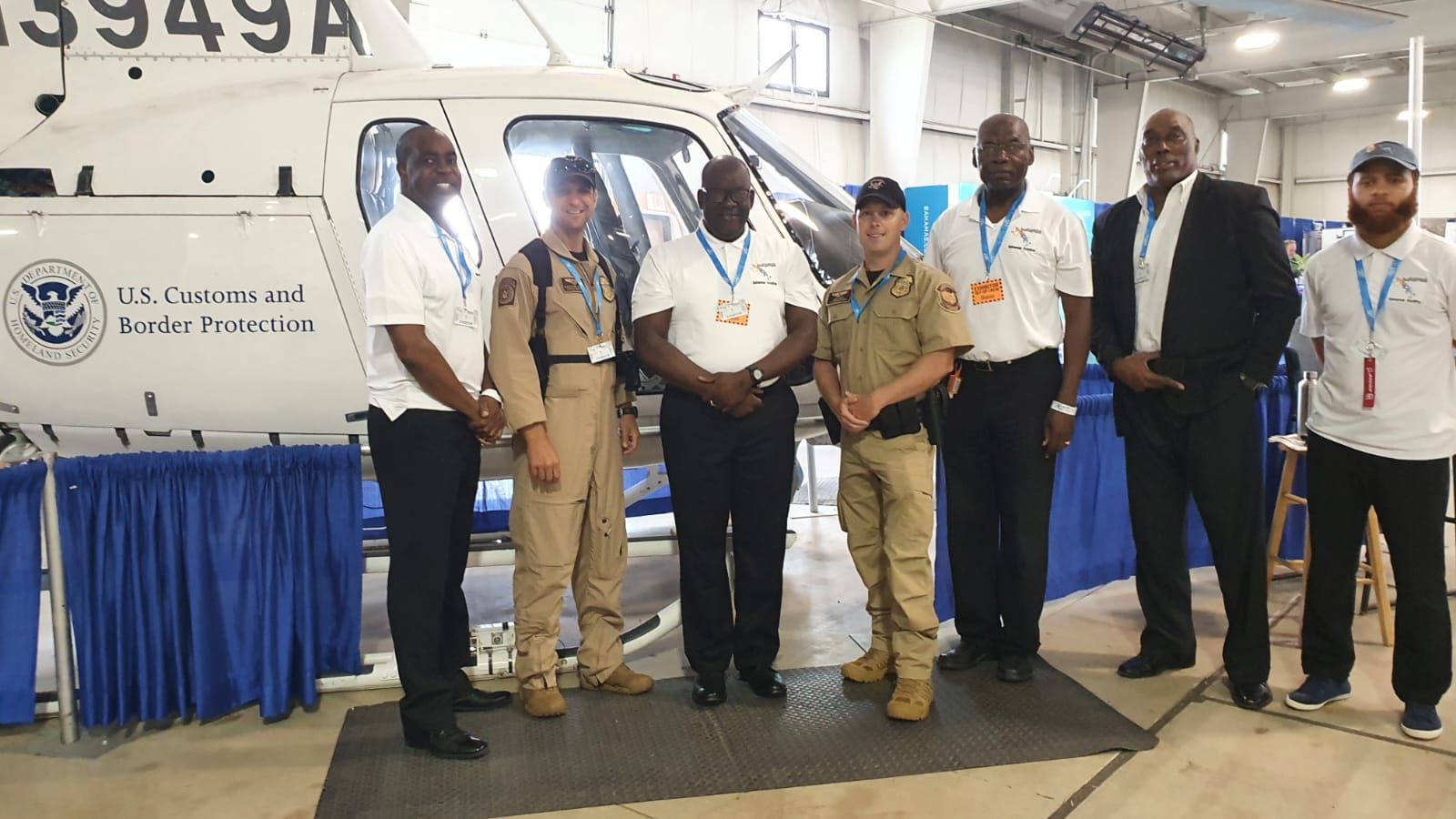 Echoing the sentiments shared by Pelton, Rolle said, “The world is still grappling with the fallout from the Covid-19 pandemic, so we certainly did not expect the high level of interest shown in The Bahamas. Neither did we anticipate the remarkable level of success experienced at this year’s show, which was evident by the number of people who visited our booth and attended the business meetings and daily seminars, as well as the outcome of our networking efforts.”

“No doubt, there is great interest in The Bahamas and a pent-up demand to visit our country – be it from visitors, private pilots or business operators. We have generated vast amount of business opportunities and group leads for fly out to our islands, from this show,” Rolle asserted.

Reginald Saunders, Permanent Secretary at the BMOTA and first-time comer to the Show, began day one with a helicopter tour of the grounds where the show was held. 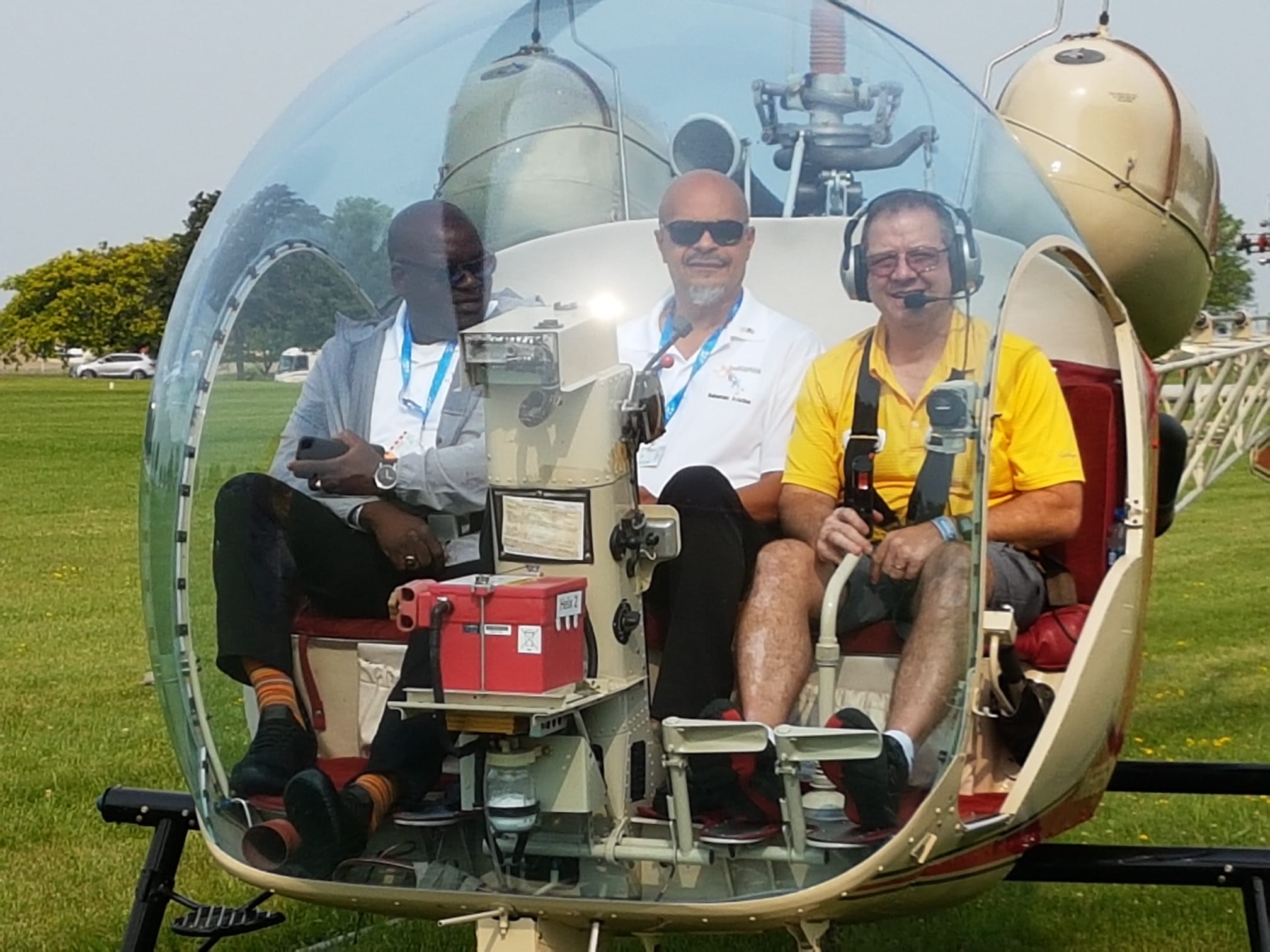 Photo Caption: VIP Helicopter Tour – EAA Executives provided Bahamas Ministry of Tourism & Aviation executives with a helicopter tour of the EAA AirVenture Oshkosh grounds, to get a bird’s-eye view of the thousands of aircraft and guests attending the “Greatest Aviation Show” in the world. Pictured left to right are: Reginald Saunders, Permanent Secretary and Ellison “Tommy” Thompson, Deputy Director General.

Permanent Secretary Reginald Saunders remarked, “This was the ‘Rolls-Royce’ of aircraft shows, and I was very impressed and totally blown away by the sheer size and magnitude of the show, from the myriad of activities , including daily airshows, to the thousands of impressive airplanes (flying hospitals, and vintage and military grades), and caliber of exhibitors and attendees. But, moreover, I was especially proud of our BMOTA team members, who were influential and fully engaged in the decision-making meetings with top IFP, EAA, AOPA, the media and other key aviation industry partners.” 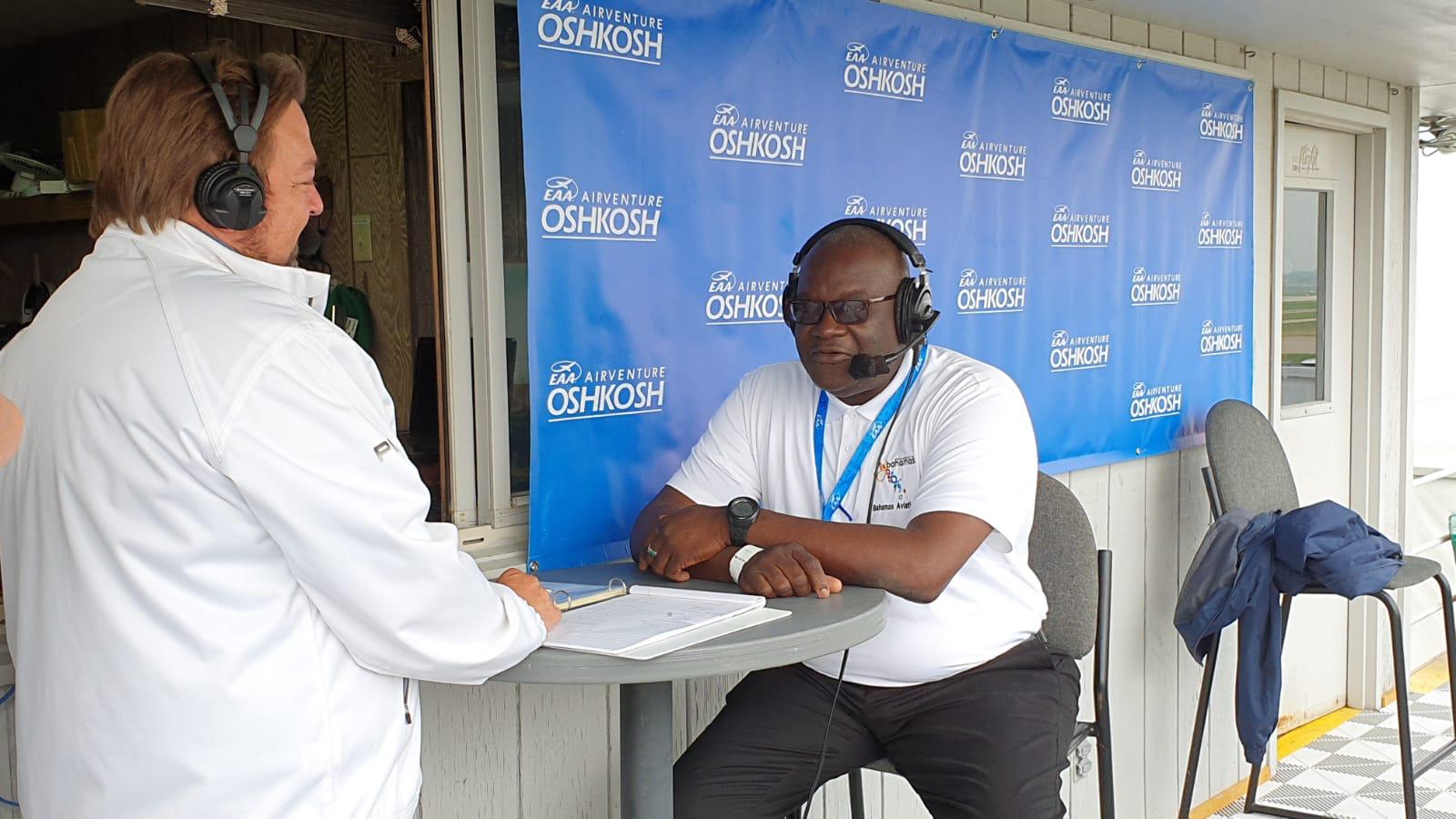 Photo Caption: While at EAA AirVenture Oshkosh, Permanent Secretary Saunders took time out to share information about The Bahamas on EAA Radio and on Florida Aviation Network TV Station. Saunders is pictured on air at EAA Radio with radio announcer, Steve Buss.

“The opportunities generated from these shows are incredible. The linkages and synergies that exist between pilots, divers and boaters are phenomenal, and we intend to build on that synergy. Private pilots and visitors love coming to The Bahamas for its beauty, multiplicity of islands, proximity to the U.S., accessibility and ease of doing business. Our plans are to further build on the later, by incorporating digitized platforms to make it even easier and more convenient for pilots to pre-pay (landing, customs, etc.) fees, especially in our Out Islands,” Saunders said.

Based on the series of productive meetings with the organizers of EAA AirVenture Oshkosh 2021 , plans are underway to ensure that The Bahamas will have an even greater presence at next year’s EAA Oshkosh and Sun n Fun Aviation Shows. Representatives from the Bahamas Civil Aviation, Airport Authority and Royal Bahamas Police Force will participate, as well as a celebration of Bahamian culture featuring the Royal Bahamas Police Force Pop Band. As a climax to each of the shows (Oshkosh and Sun n Fun), group fly outs to The Bahamas will be conducted with private pilots.

With over 700 islands and cays and 16 unique island destinations, The Bahamas lies just 50 miles off the coast of Florida, offering an easy flyaway escape that transports travelers away from their everyday. The Islands of The Bahamas have world-class fishing, diving, boating, birding and nature-based activities, thousands of miles of the earth’s most spectacular water and pristine beaches waiting for families, couples and adventurers. Explore all the islands have to offer at www.bahamas.com or on Facebook, YouTube or Instagram to see why It’s Better in The Bahamas.