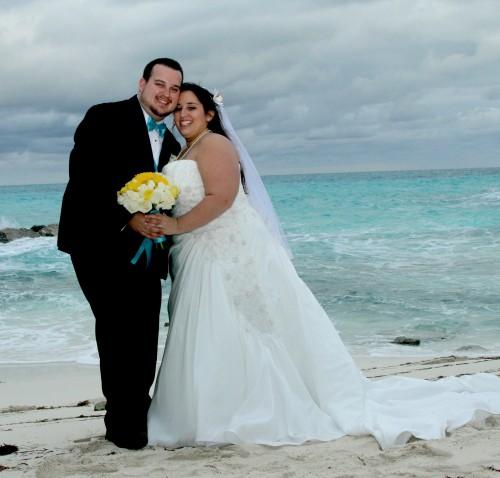 GREAT HARBOUR CAY-The Berry Islands – A small and intimate wedding was exactly what Kristyna and Ryan hoped for and they certainly got that. The New Jersey couple tied the knot on this island known for its sugar-white sandy beaches during The Bahamas Ministry of Tourism’s “16 Weddings, 16 Islands, One Priceless Day” promotion.

And at exactly 16:00 hours (4pm) the couple exchanged wedding vows on a boat, which anchored in the middle of the deep blue ocean surrounding The Berry Islands and its many cays.

Kristyna Barbella, 25 is a teacher and multi-media freelancer, while her husband Ryan Saja, 25 works in the accounting department at Kings Supermarkets.

They met during their sophomore year in high school in 2005. Ryan was Kristyna’s math tutor and he was also in her gym class.

The couple got engaged on Eleuthera – the Island, which means “Freedom” on August 9, 2013 - so it is only fitting that Kristyna, and Ryan exchange wedding vows in The Bahamas five months later.

Kristyna and Ryan and the other 15 couples flew into The Bahamas on January 13, where they engaged in pre-wedding actives facilitated by the Ministry of Tourism and its partners, before they departed for their respective destination weddings on January 14.

Upon arrival at the airport at Great Harbour Cay, the couple was greeted by officials from the Ministry of Tourism, the Department of Local Government, and owners of the five-star CarriEarl Boutique Hotel, where they stayed.

The day before the wedding ceremony, the couple explored historic and scenic sites, which included seven miles of pristine, continuous beach at Shark Creek and the Sugar Beach Caves.

They exchanged their nuptials on the seas onboard a boat witnessed by their parents Robert and Deborah Saja and Catherine and Daniel Barbella; and their sisters Nicole Barbella and Allison Saja.

The ceremony was presided over by Fr. Don L. Haynes of St. Bartholomew Anglican Church – the oldest congregation on the island at 165 years.

The reading of the “Love” scripture 1 Corinthians: 13-13, exchange of wedding vows and the signing of the marriage licence sealed about seven years of courtship between the two described as being so in love by their families.

“We feel blessed and honoured. It could not have happened to two sweeter kids,” Cathy Barbella said of her daughter and son-in-law.

She and the rest of the family were very pleased with the level of hospitality they received.

“The people here are wonderful; just a whole different experience. The people are like family.  Jersey’s nice but it’s too fast paced. It’s nice to be here in a warm climate and hospitality,” she said.

Following the ceremony, the reception was held at the historic CarriEarl, a small boutique hotel, which offers delicious food with an international flavour, served under a British flair.

Operators Angie and Marty were happy to host the couple and their families at the establishment, which was built in the late 1960s and patronized by the famous including Marilyn Munroe.

An exciting Junkanoo Rush-out performed by students of the R. N. Gomez All-Age School, capped off the celebrations.

The Ministry of Tourism contest was launched on February 14, 2014 for USA residents and resulted in more than three thousand entries. It gave 16 lucky, newly engaged couples the opportunity to have a complimentary dream wedding on any of the 16 islands in The Bahamas’ 700-island chain.

The contest also showcased The Islands of The Bahamas as the premier destination for romance, weddings and honeymoons, and also highlighted the diversity, beauty, charm, characters, flavours and cultures of each of the 16 Bahama Islands.