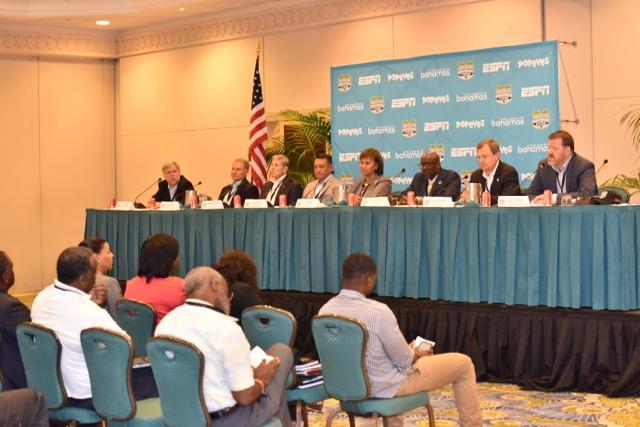 The stage is set for the third edition of the Popeyes Bahamas Bowl, which is already building up to be even more dynamic than the first two editions.

The game, an exciting matchup between two college football teams, will be played on December 23 at the Thomas A Robinson Stadium at 1:00 p.m.

Last year, the game brought increased attention to the destination and officials have projected that this year the numbers will grow.

Chief Marketing Officer Popeyes Louisiana Kitchen Hector Munoz revealed that the promotion efforts throughout the United States over the last two years racked up 8 billion impressions of the games and The Bahamas as a destination.

“To bring college football to the most beautiful island is truly a special event and we take it very seriously to the point where we promote this in our restaurants aggressively, all 1,900 restaurants in the US in the month of December,” Munoz said.

“Sometimes we even start earlier, last year we started in September. And these efforts over the two years have generated over eight billion impressions, not only in the US but obviously here in the islands of The Bahamas.

“These impressions have been generated through the merchandizing efforts at the restaurant level, our packaging, our social campaign our advertising and PR and of course the game. So it’s something that we are very, very proud of.”

Munoz said this year Popeyes will begin its promotions even earlier.

“We are committed to promoting this at our restaurant,” he said.

“The efforts are starting to commence as we speak. We will be starting to promote that in our restaurant for about a four-month period…and the plan is just to continue to generate millions or billions of additional exposure for the great Popeyes Bowl game and for the Islands of The Bahamas. As they say, bowl games are better in The Bahamas.”

Over the past two years, the games have been staged on Christmas Eve.

“I can guarantee that the turnout will be fantastic not only because the game is now so well-known but it falls on the perfect day and it is a great way to launch the Christmas weekend,” she sai

Last year, over 3,000 spectators turned out, a major increase from the inaugural year.

ESPN signed a multiple-year deal with the Islands of The Bahamas for the Popeyes Bahamas Bowl.

Jibrilu said the publicity that the destination receives from the match is immeasurable.

“The bowl has been great for the islands of The Bahamas as a vacation destination, the wide coverage of the games on ESPN and the innovative advertising of the games.

“Popeyes Bahamas Bowl is shaping up to be even more dynamic than the two previous editions,” she said.

“I can say, we all agree that the Popeyes Bahamas Bowl is a fixture on The Bahamas Christmas calendar of events.”

ESPN Event Senior Vice President Pete Derzis said the ratings for the game have improved tremendously and ESPN saw the biggest growth between year one and year two of the Popeyes Bahamas Bowl of any of the games it hosts.

“Our ratings experienced a 34 percent increase just in terms of the television viewership, not to mention all of the wonderful opportunities from the other platforms,” Derzis said.

"So we’re pleased with progress and look forward to a long, long term relationship with the people of The Bahamas.”

This year, the pool of university teams has widened. The American Athletic Conference joins Conference USA and the Mid-American conference as participating conferences. Two teams from those conferences will face off in the bowl game.

“No doubt we will have another amazing game,” Munoz said.

Jibrilu encouraged Bahamians and visitors to come to the game.

“The welcome mat in The Bahamas will be rolled out and waiting,” she said.

Tickets for the game will go on sale in a few months.

30 Sep
Fish Fry at Anchor Bay
The Governors Harbour Fish Fry is the place to be every Friday evening when on the island of Eleuthera.
Eleuthera & Harbour Island
Culinary, Festivals & Culture, Music
30 Sep
Steak Night at Bahama Beach Club
Join us for great food, fun and drinks by candlelight and on the beach.  Reservations requested.
The Abacos
Local Culture