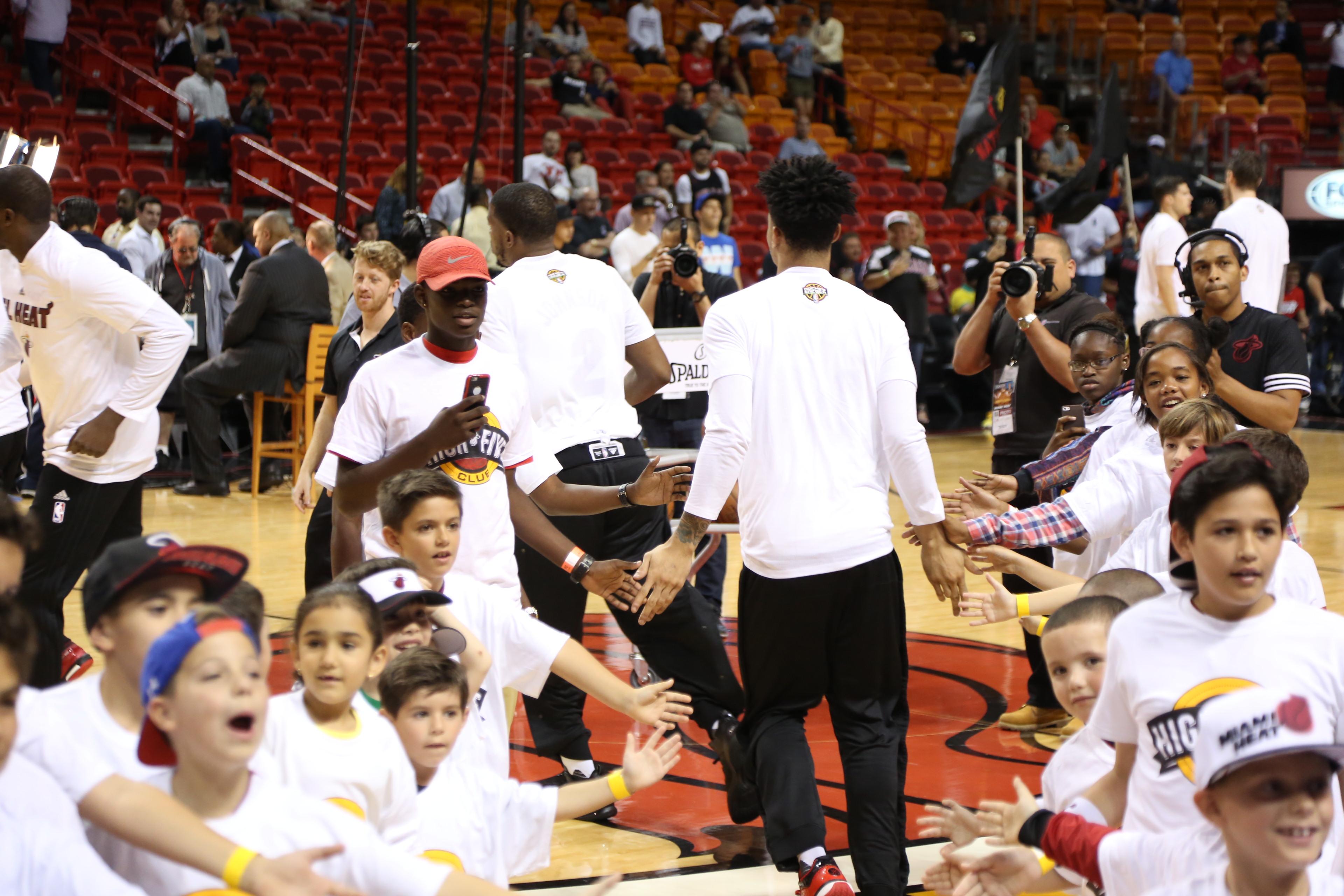 While thousands of spectators enjoyed a special Bahamas Theme Night game between the Miami Heat and Chicago Bulls at the American Airlines Arena earlier this week – no one enjoyed it more than six children from the Grand Bahama Urban Renewal Program, who were treated like royalties at the game.

The youngsters Diondrea Nixon, Hope Brown, Arjene Stubbs, Akeem Stuart, Traydico Bethel and Kendialo Stubbs, all share a common interest in the sport of basketball and were special guests of the Miami Heat Organization and the Bahamas Ministry of Tourism (BMOT).

The special guests who received court side seats participated in one-on-one ‘high five’ encounters with the Heats players, engaged in motivational talks and watched in awe as The Bahamas’ beauty, people, music and culture were presented to thousands throughout the evening.

Video vignettes of the Islands of The Bahamas, produced by the BMOT as well as scenes from the Heat dancers’ recent photo shoot in The Bahamas were shown to 20,000 spectators on the Arena’s jumbo trons.

The Bahamas’ music and culture inclusive of the music of Colyn McDonald and Stevie S were also met with great fan-fare as were Bahamas Junkanoo Carnival dancers, who performed choreographed routines alongside the Miami Heat dancers.

Accompanied by chaperones Omes Lockhart-Lightbourne and Pete Armbrister, Ms. Lighbourne said “this was the first time that any of children ages 13 and 15 years old, had ever attended an NBA game”.

Basketball player and straight A student, Diondrea Nixon, who was selected by her school’s principal because of her academics, attitude and ambassadorship, said the experience has left her more committed to her country, education and love for basketball sport.  Thrilled by the opportunity, the 10th grader said she “will forever cherish the experience and hold to the inspirational and motivational lessons learnt as a part of this experience”.

Inspired to pursue his dream of being the best basketball player, 15 year-old Kendialo Stubbs, said he felt honored to meet his favorite NBA player, Dwayne Wade and inspired to work even harder, be a better person and chase his basketball dream.

Blue Jay’s Shooting Guard and 11th grader from Eight Mile Rock High, Traydico Bethel said while his recent defeat at the Bahamas Hugh Campbell Basketball Championship left him slightly disappointed, the opportunity to experience such a high level basketball game and meet some of the NBA’s best players has given him a renewed spirit and commitment toward excellence.

Now in its third year, the Bahamas Theme Night is part of a five-year partnership the BMOT has with the Miami Heat Organization.  Last year the BMOT and Miami Heat provided a similar experience for six children from the Bahamas Ranfurly Home For Children.