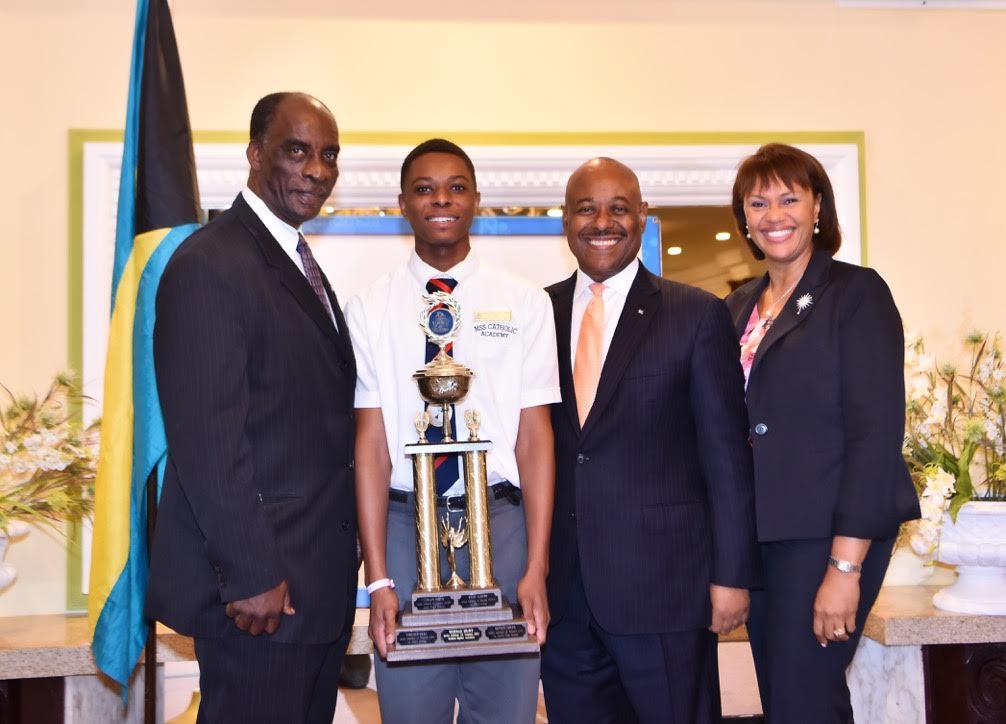 After successfully defeating 11 students from around the country, Gabriele Josephs of Mary Star of the Sea has been named the new Junior Minister of Tourism.

Under this year’s topic, “Diversifying The Tourism Product Through Entrepreneurship" Josephs and other students duked it out in a thrilling speech competition final.

As the junior minister, Joseph receives the title, the Patrick S. Bain Scholarship; an all-expense paid four-day trip to CTO Youth Congress; $500.00 cash prize and a trophy. Mary Star of the Sea also receives $500.00 and a floating trophy to commemorate the accomplishment.

Reflecting on his win, Josephs is delighted to have been chosen to represent the Bahamas.

“The mixture of the sun, sand and sea with the communal atmosphere, the friendly people and the incredible atmosphere and the beauty of our islands that makes The Bahamas so unique and this is what I’m going to promote to the world.”

Evelyn Pinder-Dames, senior mistress of Mary Star of the Sea and coach of Gabriele, described him as being the model student.

“He is a model student and he’s very focused academically. He also has a creative mind when it comes to writing and putting things together,” boasted Dames.

“It’s a pleasure working with him because of his creativity and his natural flair for presenting himself.”

Sabrina Josephs, mother of Gabriele, believes that carrying the title will bring out the best in him.

“The junior minister title gives him a platform for him to explore. I’ve seen something in him today, that makes me feel as if he should be on a stage,” she said

Minister of Tourism Obie Wilchcombe marveled at the speeches given by the students.

“Two important words, I thought stood out in the subject you were given. One was entrepreneurship and the other was diversity,” he said.

“If you think about Mayaguana, think about the fact that she understood her island so very well. Think about Long Island, she knows her island. She spoke about the churches and things that can happen right now. It tells you that they have an understanding of their island. They know what they’re talking about, they understand.”

The Junior Minister of Tourism Program offers one candidacy, per island including New Providence. It is also open to Bahamian citizens of both government and private 11th grade students.

In addition to the Ministry of Tourism, BTC, the Islands of the Bahamas Logo Store, Micronet and Lenovo also sponsored the program.

The Junior Minister of Tourism program was launched in 2002 to promote awareness among high school students. The program consists of three phases: Sourcing interview, speech preliminaries and speech competition finals.