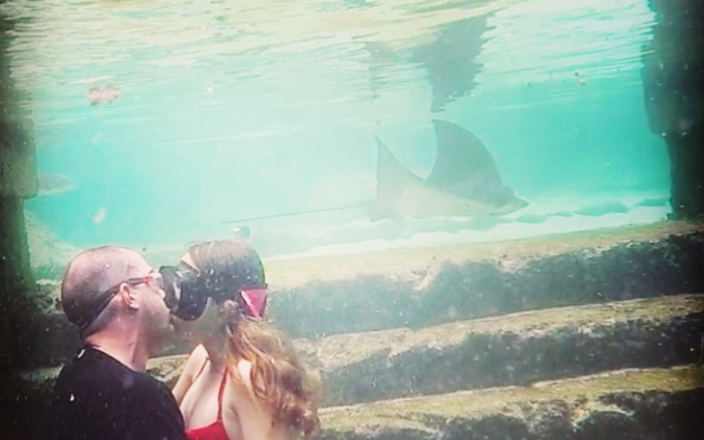 Love is always in The Bahamas and one adventurous couple is hoping to put their love and commitment on display to break the Guinness World Record attempt for the longest underwater kiss on July 24, 2016.

Earlier this year, Gordon and Mymy McKenzie of Scotland and Switzerland respectively, took part in a world record attempt to break the longest dive at Stuart Cove and left with an idea that could not only shatter the world record but also raise money for the Southern Islands impacted by Hurricane Joaquin. Currently, the current record for the longest underwater kiss stands at three minutes and 24 seconds and is held by two Italian free divers.

After Hurricane Joaquin had destroyed the Southern Islands, the McKenzies watched with interest as St. Andrews, the school where Gordon teaches did a magnificent job of raising money.

The couple was inspired so much that they decided to attempt to break a world record to raise money to support the efforts.

Gordon said they chose the Southern Islands in particular to raise money because people tend to move on with their lives and forget the devastation caused after disasters.

“I see all the time that people forget when these things happen and they think they'll do some fundraising for a few months and then it's fine,” he said.

“I'm a school teacher and we have a student with us who can't go to school down there anymore and also we thought it was worthwhile cause to do what we're doing to raise a lot of money to help some people out.”

Although on their own, both Gordon and Mymy can hold their breath for more than four minutes. However, attempting to hold an underwater kiss longer than 30 seconds is no easy task but they have managed to follow a rigorous schedule every day to prepare for their challenge.

Mymy said the key to breaking the record lies in the technique itself.

“We did a free diving course to practice some techniques and it’s a lot about being relaxed and knowing how to breathe slowly so you can slow down your pulse,” she said.

One of the training methods, the couple uses is called static apnea training, which is a discipline in which a person holds their breathe underwater for as long as possible.

Gordon said they do as much with static apnea as they can but the real challenge stems from being in the kissing position.

“Obviously for this record, we have to be in the position of kissing one another which unlike normal apnea you have to relax your muscles by kneeling down and holding on to each other,” he said.

“The challenge comes when we’ll have to use some oxygen to train in that position.”

To find out more about their challenge, visit their page at Generosity: https://www.generosity.com/emergencies-fundraising/mymy-gordon-s-world-r....

NASSAU, BAHAMAS (March 12, 2019) – Baha Mar, the newest resort destination in The Bahamas, has partnered with Engage!
Weddings and Honeymoons
Hotel

The Bahamas Ministry of Tourism hosted a Bahamas Date Night for couples in New York City. There was also a special surprise...
Video
Tourism Today
Weddings and Honeymoons