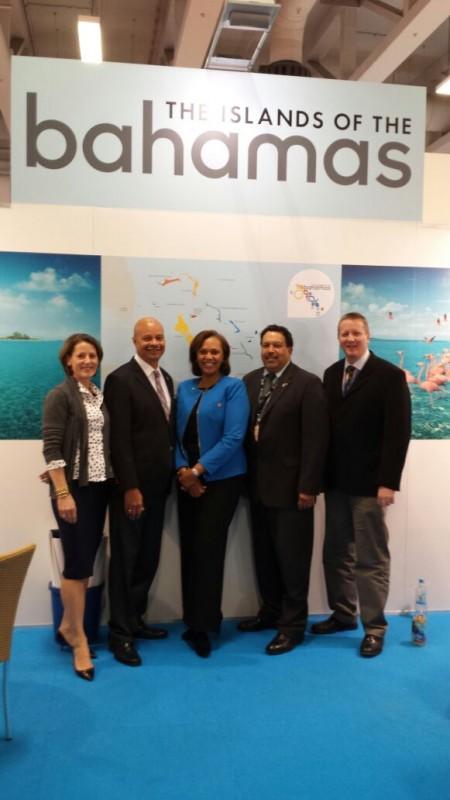 Berlin, Germany – Senior officials in the Ministry of Tourism are this week in Berlin, Germany participating at the ITB 2015 conference – the largest tourism trade show in the world.

“We have several meetings arranged with a number of European airlines. We’ve said that there is that interest and the interest now has to manifest into getting some people from Europe, Germany and so we are excited about that,” Ms. Jibrilu said.

“We are meeting with all of the major tour operators over the next few days. This is critical because people in Germany book through their tour operators. Very few will choose to come to The Bahamas and go online and book that way. So to establish these relationships and reconnect with tour operators bodes very well for us.”

Ms. Jibrilu will also represent Minister of Tourism Obie Wilchcombe in a number of high-level meetings with ministers of tourism and other high-ranking officials throughout the region.

“That is going to be aired and transcribed, inserted in a magazine as well as streamed online. And that’s incredible exposure for The Bahamas. And so I will also speak on sustainable tourism and that’s in a mega hall with this huge audience. And so The Bahamas is really at the forefront and being showcased in a great way.”

Director of Europe Anthony Stuart said ITB allows The Bahamas to have more access to the market.

“A lot of the visitors have to travel via a destination and in most cases that is via the United States. What this allows us to do is more things to open the market. With the amount of flights coming out of Germany like American Airlines, Delta Airlines, which have to stop in places like Atlanta… it gets us more open to allow more access to the destination and allows us to open to other markets,” he said.

“A European vacationer is not a one week visitor. They are more like a two-week to a month visitor. They are not a one-destination vacationer. They could spend a week in South Florida and The Bahamas. Those who spend a week in The Bahamas have the tendency to stay in Nassau and then go to explore the Family Islands and that is why the European market is so important.”

There are over 180 countries participating in ITB.

Over 110,000 visitors flock to the much-anticipated conference every year.