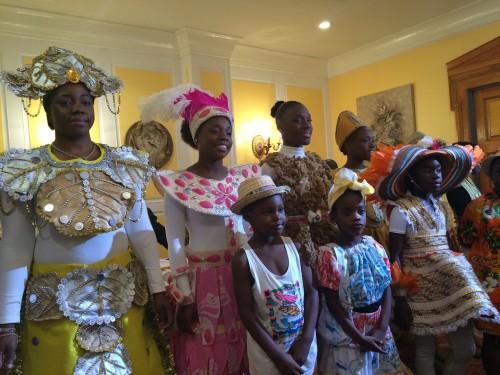 Chairman of the Bahamas National Festival Commission (BNFC) Paul Major says the future of Bahamas Junkanoo Carnival is secured now that thousands of the nation’s youth are expected to participate in Youth Culture Fest.

The event, which is scheduled for May 1, will bring together 25 schools and youth community groups in a parade on Arawak Cay.

Each group will have a minimum of 50 school-aged children performing in the parade.

It is expected that this will lead to 1,500 to 2,000 children participating in the inaugural event.

During the parade, the youth will be displaying costumes made from indigenous Bahamian material like straw, shells, thatch and sponge among other things.

Mr. Major said he could not be more proud of the event.

“I think this is very, very exciting and it guarantees the sustainability of our culture,” he said.

“Our future is safe in their hands,” Mr. Major said.

“During the Youth Culture Fest between 5:00 p.m. – 10:00 p.m. we are creating Da Cultural Village that will be at Arawak Cay. Companies that are interested in sponsoring a group or purchasing costumes to support the young people can contact our office and we will accommodate them,” he said.

“We would like our young people that companies that are supporting them and stepping up and assisting. Their futures are secured through the efforts of our corporate partners.”

Youth Culture Fest Coordinator Dr. Ann Higgins said Youth Culture Fest is different from Junior Junkanoo because the groups will be showcasing indigenous Bahamian costumes through themes based on the Family Islands.

“The children will have to become familiar with the indigenous materials they are using. They will be educated in knowing what they are making. We will also have hands-on help as well,” she said.

The Bahamas Junkanoo Carnival groups through various designers are selling most of the children’s costumes.

For a child to participate, a parent or guardian can contact the commission to connect them with a group participating from their area.

Dr. Higgins said it is hoped that visitors will be engaged in the parade as well.

“Eventually, when they hear about our culture fest maybe in another year we would like to invite children from other cultures around the world to join us,” she said.

“This is something I am looking forward to because we have taken our children to other parts of the world to represent us in other cultural festivals. So we would like to come over and appreciate what we have.”

The third and final night of Bahamas Junkanoo Carnival was a Caribbean entertainment session with the best in Bahamian, Jamaican, Trinidadian, and Cuban music.
Video
Tourism Today
Junkanoo Carnival
VIDEO

Road Fever, the most anticipated event of Bahamas Junkanoo Carnival presented by BTC has sadly come to an end for many revelers.
News
Top Stories
Junkanoo Carnival
VIDEO